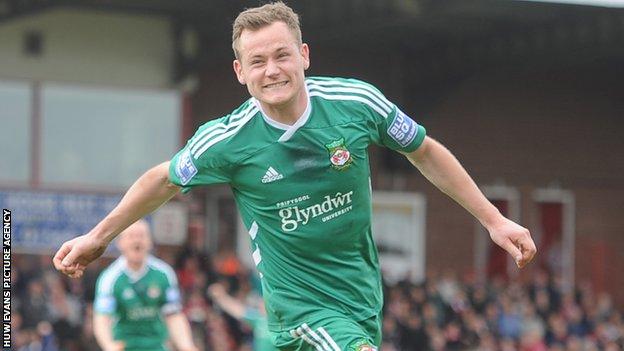 Wrexham booked their place in the Blue Square Bet Premier play-off final with a 5-2 aggregate win over Kidderminster.

Trailing 2-1 from Tuesday's semi-final first leg in North Wales, Harriers were left with an uphill battle when Brett Ormerod scored after 29 minutes.

Chey Dunkley offered hope with a 64th-minute strike to equalise on the day.

And they will remain concerned ahead of Wembley that, in the 10 previous seasons of play-offs in the Conference, no team finishing fifth in the final league table have ever gone on to be promoted.

But the odds on chance to make it third time lucky, at least as regards a second trip to Wembley in five weeks, always looked to be shortening from the moment that Ashton slotted his controversial, late tie-turning penalty at the Racecourse Ground five nights earlier.

While Wrexham player-manager Andy Morrell named the same team that the Harriers made three changes.

Mike Williams came in at left-back in place of Mickey Demetriou, while Martin Devaney replaced Marvin Johnson on the right wing and Danny Pilkington came in on the left flank, Danny Jackman shuffling across to fill the injured James Vincent 's central midfield role.

Harriers, who have this season been very much a second-half team, started brightly for once.

Michael Gash's delicate header from Lee Vaughan's cross hit the post and visiting keeper Chris Maxwell made a good save from a header by Dunkley, who then had a penalty shout after going down under a challenge from Stephen Wright.

But Wrexham, who had beaten twice by Steve Burr's Harriers during the regular season, this time did it when it mattered. And they took a big stride towards Wembley just before the half hour when they went in front.

Jay Harris slipped in Ormerod, running unmarked down the inside right channel, and the veteran striker clipped home a right-foot shot from 20 yards.

Wrexham in the Conference

It might have been 2-0 early in the second half when, after Dunkley had clumsily fouled Morrell, Clarke's cross was headed just wide by David Artell.

But, after Devaney had stolen in behind, only to be twice thwarted, Dunkley gave Harriers a lifeline when, after seeing his header blocked from Kyle Storer's cross, the home centre-half scrambled in the rebound.

Parity on the day was only to last five minutes, however.

Clarke's low free-kick wide out on the left somehow sneaked its way into the net at the near post past a distracted Lewis.

And, when substitute Adrian Ciesiwicz was adjudged to have been brought down by Josh Gowling, Ashton's second penalty of the tie put the lid on it, to send the 1,650 visiting Welshmen into further vocal rapture - and secure that return trip to Wembley.

As for the Harriers, like Wrexham two years ago, they felt the pain of finishing runners-up and not making it all the way,

In 11 seasons now since the Conference play-offs came in have that season's runners-up ended up getting promoted.

"Wrexham are a good side. But to be better next season it means we've got to win it.

"Maybe they'll wake up and realise that this division warrants two teams going up, and then a play-off, like every other league.

"But we knew the rules of the competition.

"It's just hard to take when you get so close."

"I'm made up, but I've reiterated to them all that's there's nothing to celebrate. We haven't done anything yet.

"We thoroughly deserved to go through over the two legs. We were strong.

"They asked a lot of questions of us but we managed to stand up to it and get the goals at the right time.

"But it was hard work. We put a lot of effort in on Tuesday night and, right at the end, there were a few with empty tanks."