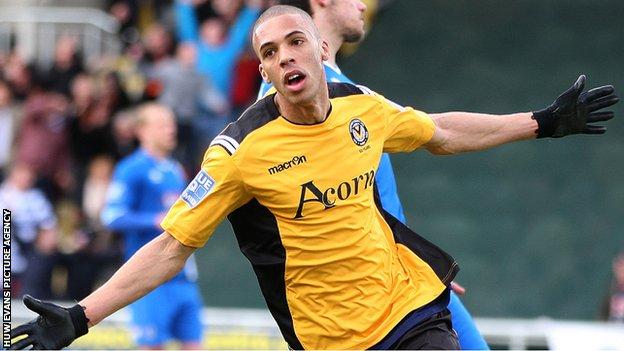 Christian Jolley scored the only goal of the game on 31 minutes with a low shot which beat James McKeown.

Grimsby started brightly, Tom Naylor forcing keeper Lenny Pidgeley into a save, but Newport were in control once Jolley had broken the deadlock.

Victory sets up a Wembley final against Wrexham to guarantee that a Welsh club will play in League Two next season.

Holding a 1-0 lead from the first leg, Newport manager Justin Edinburgh kept faith with the side which started at Blundell Park.

The Exiles were also boosted by the inclusion on the bench of top-scorer Aaron O'Connor, who missed the first game through injury.

The Mariners gave two early warnings to Newport, Naylor firing over the bar, while Craig Disley's header was blocked by David Pipe.

Naylor's low shot then forced Pidgeley into a one-hand save to push the ball past the post during an opening quarter in which Grimsby had the upper hand.

In response, Mike Flynn saw a shot blocked by Disley, while Pipe headed over from Andy Sandell's cross before the home side went in front.

Alex Gilbey picked up the ball in midfield and provided the pass for Jolley, who shot across the face of goal beyond the dive of McKeown.

The goal gave the home side confidence, Gilbey's effort from the edge of the box forcing McKeown into a save.

Grimsby introduced top scorer Andy Cook at half time in place of Shaun Pearson. But, rather than sit back on their lead, Newport continued to press forward, Flynn missing a glorious opportunity to settle the tie only to scuff the ball wide from close range.

Crow had a goal disallowed for offside and a Flynn shot was gathered at the second attempt by McKeown as Newport dominated.

The Mariners needed two goals to take the game into extra-time but they were not putting Pidgeley under any great pressure. And Edinburgh's side saw out the game comfortably to set up an all Welsh final at the home of English football on 5 May.

"We kept a clean sheet against Grimsby in two legs and it's a great achievement.

"It's brilliant, I can't ask for more. I've been here since January permanently now and it's the icing on the cake.... you've seen us today, we were brilliant."

"It's a long hard season. A lot of hard work goes in, you get to the play-offs, you know what the deal is, and we came up slightly short over the two games.

"I thought today that we started the game well, we've had three decent chances to get in front and then we missed a chance.

"Second half, especially towards the end of the game, they were always going to have a couple of chances and have gaps to play in because we were going to have to change it

"I'm just disappointed that second half we never really put them under any pressure."