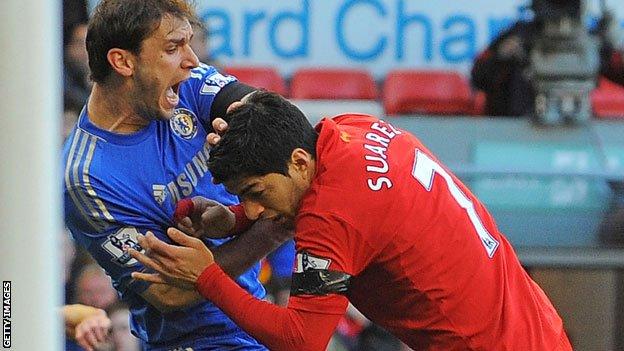 Liverpool have fined Luis Suarez for biting Chelsea defender Branislav Ivanovic but insist the striker still has a future at the club.

Suarez, 26, bit Ivanovic's arm during his team's 2-2 draw against Chelsea.

Asked if the incident would affect the player's time at the club, Liverpool managing director Ian Ayre said: "Not at all.

"What Luis Suarez did has absolutely no place in football and he is going to get - and deserves - an extremely lengthy ban.

"You cannot bite people anywhere, let alone on a football field. It is the type of thing you do when you are a baby. He's a world-class player but he gives you world-class trouble."

"It affects his future in the sense that we have to work with him on his discipline."

The Football Association will review the match official's report into the game and incident before deciding what course of action to take.

However, Ayre said he has spoken to the club's owners concerning the controversy and added: "Luis is a very important player to the club.

"As we keep saying, he signed a new four-year contract last summer and we'd all love to see him here throughout that contract.

"He's a fantastic player, top scorer and everything we'd want in a striker, so there's no change there.

"This is more about getting him back on the right track and it's largely down to [Liverpool manager] Brendan [Rodgers] now to work with him on that side of his character."

Merseyside police say they will not take any action against Suarez, with Ivanovic not reporting any physical injury and telling officers he did not want to pursue the matter.

Suarez issued a swift apology following the conclusion of the game at Anfield on Sunday and also spoke to the Serbia international.

"I've spoken to Ivanovic on the phone so I could apologise directly to him," Suarez tweeted. "Thanks for accepting."

He also tweeted: "For my unacceptable behaviour the club has fined me.

"I have asked the club to donate the money to the Hillsborough Family Support Group for the inconvenience I have created to the Liverpool fans and to Ivanovic."

It is not the first time that the Reds forward has committed such an act. While playing for Ajax, he was banned for seven games after biting PSV Eindhoven midfielder Otman Bakkal during a match in November 2010.

He moved to Liverpool in January 2011 and was given eight-match suspension and fined £40,000 for racially abusing Manchester United left-back Patrice Evra in December 2011.

Following Suarez's latest misdemeanour in biting Ivanovic, he has been offered anger management therapy by the Professional Footballers' Association.

Its chief executive, Gordon Taylor, said: "We've got a lad here who is an extremely good player, one of the world's best and is letting himself, the club and the game down by his actions.

"While it's good he made a personal apology we have got to work really hard with him and I hope the club agree on this anger management business to avoid it happening again and setting the worst possible example."

Suarez has scored 30 goals so far this season and is one of the six contenders for the PFA Players' Player of the Year award.

Taylor added: "It would be embarrassing if he is named Player of the Year but we have got to deal with it and make sure he is player of the year not just in a footballing sense but as a human being as well and we will be trying to do that."

It added: "We will be reminding him of the standards we expect from our players. Luis has admitted his actions were unacceptable and we support the way Liverpool are planning to handle the situation."