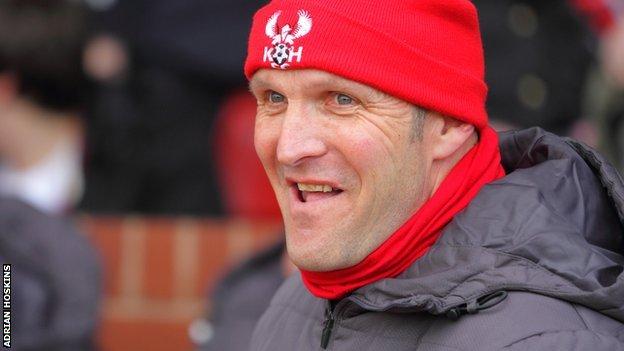 Kidderminster Harriers manager Steve Burr is looking for the Aggborough crowd to inspire his side to victory in Sunday's Blue Square Bet Premier semi-final second leg against Wrexham.

After losing out on automatic promotion to Mansfield, Harriers lost Tuesday's first leg 2-1 at the Racecourse Ground.

But Burr insists: "I'm sure on Sunday our fans will be vocal and get behind the team and that we can turn it round.

No doubt aided by Wrexham's 1,600-following, Burr is looking to the Harriers fans to recreate the tremendous atmosphere generated by last Saturday's season-best 6,453 crowd - until it was soured by a small section of Stockport County fans,

"It took me back to when I came here and watched Kiddy play Chester just before I took over in January 2010," Burr told BBC Hereford & Worcester.

"There was only 1,100 here that day but I thought then that an ambition of mine would be to get this place full and rocking.

"And it was certainly rocking on Saturday.

"There's still a fantastic atmosphere about the club.

"And, after the way we started the season, what the lads have done is testimony to a lot of hard work.

"We've just got to go out there and finish the job."

After just four defeats in 36 league games since waking up on the morning of Saturday 29 September still bottom of the Blue Square Bet Premier, Burr's men are certainly owed better luck than they have had over the last week.

On Saturday, they cruelly found themselves missing out on automatic promotion.

Despite doing their bit to beat Stockport 4-0, a lone first-half Mansfield Town penalty at Field Mill, against a badly-weakened Wrexham side, was enough to see the Stags pip Harriers to the title - by just two points.

The tale of Artell's red card

"The Football Association of Wales considered a claim of wrongful dismissal for the sending-off of Wrexham FC's David Artell for serious foul play. Having carefully considered the written and DVD evidence submitted, the panel decided that the claim be successful and that the standard three-match suspension for the offence be withdrawn." Statement from the FA of Wales

"Our appeal was purely that a three-game suspension might be too severe in this particular case. We were fortunate that, as the game was covered by live television, the panel had the opportunity to view several different camera angles. On the day, the referee gave an honest decision. The red card still stands on the player's record." Statement from Wrexham FC

At the same time, Aggborough was being invaded by a small number of Stockport fans, upset at their club's impending third relegation in four years.

That led to Harriers right-back Lee Vaughan behind struck from behind and an inquiry that could yet lead to action against the club as there was no police presence inside the ground before the trouble.

Then, when Burr's men went to a considerably strengthened Wrexham three nights later, despite Michael Gash's second-half equaliser from the spot, they were beaten by a controversial, late Neil Ashton penalty.

And that came on top of a first-half header from home centre-half David Artell, who had not been expecting to play after being sent off three days earlier at Field Mill.

Wrexham, having thought Artell's three-match ban too severe, appealed to the Football Association of Wales, who then opted to overturn Essex referee Nick Kingsley's original decision to leave the defender free to play against Harriers - just hours before Tuesday's game.

To his credit, Harriers boss Burr kept his cool afterwards, refusing to hide behind all those factors as an excuse for his side's poor first-half display in North Wales.

Instead, he preferred to concentrate on the positive second-half performance generated by substitutes Martin Devaney, who replaced the subdued Marvin Johnson, and Keith Briggs, on for the injured James Vincent.

"As hard as we tried, we couldn't get into it in the first half," said Burr.

"We had one or two knocks and we lost James Vincent with a hamstring.

"But both subs came on and did well. And Devaney, in particular, really gave us a boost.

"That's what you want from your subs."

Now Burr hopes that his Harriers side, having carved out something of a reputation as a second-half side this season, have something more to give in the second half of this tie.