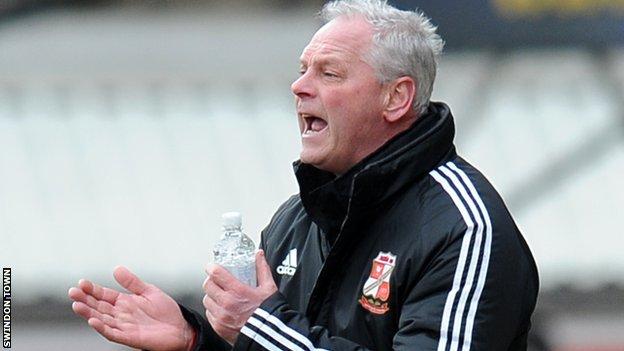 Manager Kevin MacDonald has insisted Swindon Town do not fear any other team in the League One play-offs.

Saturday's 3-0 victory over Stevenage guaranteed them a top-six finish.

They go in to their final game of the season against Scunthorpe in fifth place, but could climb up to fourth if they win and Yeovil lose.

"We're not frightened of anybody," MacDonald told BBC Wiltshire. "It's going to be difficult for whoever plays us and for whoever we play as well."

Swindon were only two points off an automatic promotion place when MacDonald succeeded Paolo Di Canio in February, but a run of five games without a win meant they had to settle for the play-offs.

However, back-to-back victories have given Town a much-needed boost and MacDonald said: "We need to keep the momentum going.

"When they've been on it, which is the last couple of games, they create plenty of chances. The players have to look after themselves, rest as much as possible and then look forward to having a bit of fun."

Midfielder Gary Roberts, who scored the second goal in Saturday's win, will play in his fourth consecutive play-off campaign, following his spell with Huddersfield.

He was on the winning side in the final at Wembley last year and is hoping to replicate that success with Swindon.

"This is a few years on the spin for me now and I'm used to this at the end of the season," said Roberts.

"It's good because if you win through the play-offs it's better than going up automatically, and you get the day out at Wembley.

"It was magical last year. We felt like we were owed it because we'd lost out a couple of times. It was the best day of my footballing career. To do it again would be wonderful."