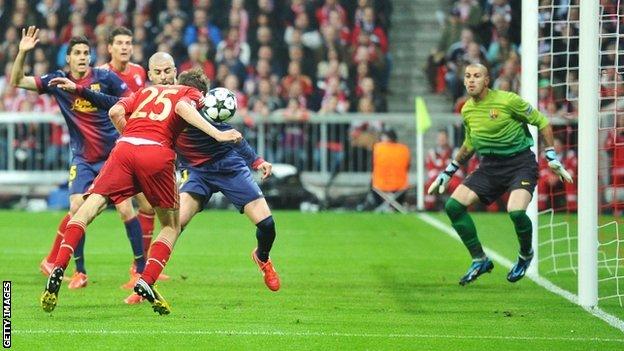 Jupp Heynckes' newly crowned Bundesliga champions produced a magnificent performance laced with power, intensity and quality to give the Catalan superstars a mauling they will surely find impossible to avenge in the Nou Camp next Wednesday.

This was Barca's worst defeat in Europe since they were beaten by the same scoreline by Dynamo Kiev in 1997, and no team has lost the first leg of a European Cup tie by four or more goals and progressed to the next round.

Barca coach Tito Vilanova gambled and lost on a clearly unfit Lionel Messi - but to suggest this was the prime factor behind this crushing loss is to do a grave disservice to Bayern.

Former Barcelona coach Pep Guardiola will replace Heynckes in the summer but this dignified 67-year-old elder statesman may well leave behind the Champions League trophy.

Thomas Mueller gave Bayern an early lead and their superiority was confirmed when Mario Gomez added a second just after half-time.

Former Chelsea winger Arjen Robben tormented a desperately vulnerable Barcelona defence, adding a third before Mueller got his second near the end to surely put this tie out of even Barcelona's reach.

And all this on the day Bayern wielded their power in the transfer market again by announcing a £32m deal for Borussia Dortmund's brilliant 20-year-old Mario Gotze - heady days indeed for the German glamour club once dubbed "FC Hollywood".

In a fevered atmosphere inside a packed and jubilant Allianz Arena, Bayern looked a team intent on erasing the bitter memories of the Champions League final defeat on penalties by Chelsea on their own ground last season.

Messi was declared fit to play and started for Barcelona despite concerns about the hamstring injury he sustained in the previous round against Paris St Germain. He looked a long way from his usual brilliance - but he was not alone as buoyant Bayern took control of proceedings.

On a pitch that showed signs of being heavily watered, Bayern gave Barca a taste of their own medicine with a high-intensity pressing game aided by the confidence of an outstanding season in which the Bundesliga was secured on 6 April, the earliest it has ever been won.

Bayern should have been ahead inside two minutes when Robben, perhaps selfishly, chose to shoot and saw his effort blocked by visiting goalkeeper Victor Valdes with both Gomez and Franck Ribery pleading for the pass in perfect positions.

The opening goal had been coming and it duly arrived after 25 minutes. Dante's header from Robben's cross was off target but the opportunist Muller arrived at the far post to score, despite Valdes making good contact.

Even though the Spanish side were struggling for rhythm, Barcelona's quality meant danger was never far away. And so it proved as it took a crucial touch from Dante to take Dani Alves' delivery away from the lurking Messi.

But Bayern's spirits rose further four minutes after half-time when they added a second. Valdes was uncertain from Robben's corner and, when Mueller headed back, the arch-poacher Gomez turned in as Barcelona appealed in vain for offside.

Bayern's work-rate and power had restricted Barcelona's attack to few dangerous moments, but there was anxiety for the home crowd when Marc Bartra found space eight yards out only to poke his finish straight at home keeper Manuel Neuer.

The German champions were coming at Barcelona in waves and extended their advantage further as the lively Robben worked his way into the area to score from an angle, although there seemed to be a clear case for an infringement as Mueller blocked off Jordi Alba.

Barcelona's agony was not over yet as Mueller applied another of those trademark close-range finishes from David Alaba's cross to give Bayern an advantage of such command it is difficult to see how it can be retrieved.