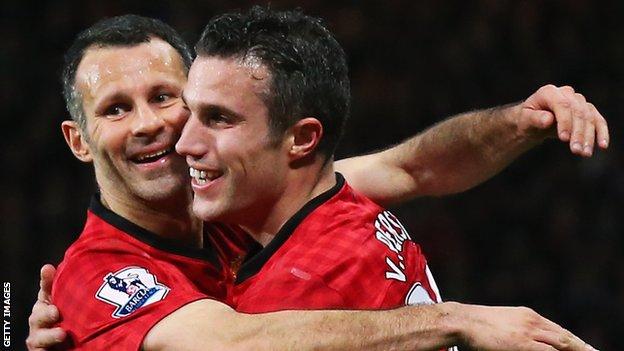 Ryan Giggs has been hailed by Uefa president Michel Platini for staying loyal to Manchester United.

The Welshman was in the Red Devils team which secured the title with a 3-0 win over Aston Villa on Monday night.

United have now won the Premier League 13 times and Giggs has featured in all of those title-winning campaigns.

"That is beautiful. I like the people that fight for their colours and don't change [clubs] every two months to make business," Platini said.

"He's a guy who would never change clubs."

Cardiff-born Giggs has spent his entire career at Manchester United since making his first-team debut as a 17-year-old in 1991.

The 39-year-old made his 1,000th senior appearance this season and signed a new one-year contract with United in March.

And Uefa president Platini, a former France captain, says Giggs's loyalty is to be admired.

"It's not because to be at better clubs, it's to have better money.

"Ryan Giggs is totally different. It's important to create an identity and it's important that one guy for one club fights for the colours."