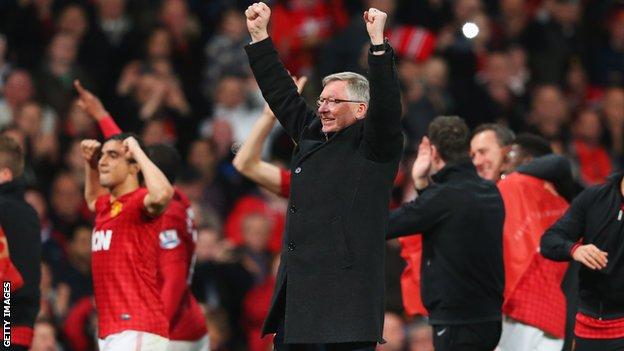 Sir Alex Ferguson says his Manchester United players "came up trumps" by battling back from last season's disappointment to claim a 20th title.

"They focused on the challenge of City and came up trumps," said Ferguson. "Our consistency for the last 20 years is unbelievable."

On Robin van Persie: "Robin has been unbelievable. The second goal reminded me of myself, but I can't remember when!"

On Ryan Giggs: "Deary me, he is a freak, a unique freak. A phenomenal man."

On Rafael Da Silva: "I think Rafael will eventually be comparable to Gary Neville."

On his own future plans: "Look at me - it's taken 10 years off me today. It's these tablets, they're great!"

The win over struggling Aston Villa, inspired by Robin van Persie's hat-trick, handed United the points they required to wrap up the league with four games to spare.

It made up for the despair of last May, when Ferguson's side were denied the title by City on goal difference.

"This club never gives in," the Scot, 71, added. "From Sir Matt Busby, the Munich Disaster, to rebuilding and to win the European Cup, that tells you the history of United.

"Every player who comes to this club has to have that engrained. We have lived up to the expectation.

"What the players had to do was focus on how we lost the league last year and make no mistakes. The focus was good.

"The one thing I said to them was don't lose on inferior goal difference. We'd never had that before at this club and this season we have corrected that."

Asked if his current squad was the best of his 26-year reign at Old Trafford, Ferguson responded: "This could arguably be. There is a lot of youth and a lot will get better, we expect that.

"It is sweet, it doesn't matter when you win the title, the consistency has been phenomenal."

United are 16 points clear of nearest rivals City and could finish the campaign with a record-breaking 96, eclipsing the Premier League points total of 95 set by Jose Mourinho's Chelsea side in 2004-05.

But even on their way to the title, Ferguson's team have had to face the criticism that they lack the quality of United teams of the recent past.

"Put it in context, we've now got 84 points with four games left. We've never done that."

On City's title failure, Ferguson added: "The games between the two of us there was nothing in it, but in the rest of them we were far better.

"We were a far better team than Man City in beating other teams."

"All the great goals we've scored over the years, from David Beckham through Ole Gunnar Solskjaer, Eric Cantona, that goal has joined that," said the manager.

"Robin has been unbelievable. Tonight he was unstoppable. The second goal reminded me of myself, but I can't remember when!

"He scored exactly the same goal for Arsenal."

On Ryan Giggs securing a 13th Premier League title, Ferguson added: "Deary me, he is a freak, a unique freak. A phenomenal man. We are lucky to have him and Paul Scholes, you are blessed as a manager.

"You have to look at how lucky you have been and that I have been. Other ingredients come into it but I am lucky to have them."