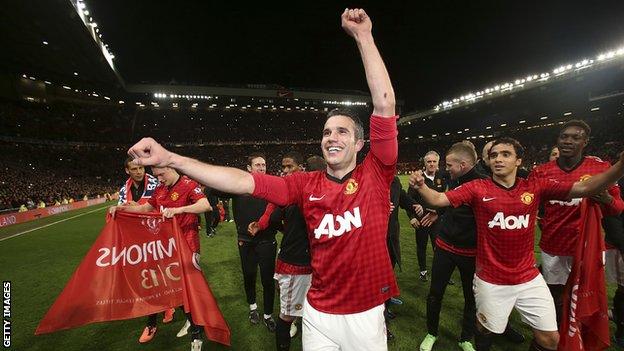 Robin van Persie says his first Premier League trophy was worth the wait as the striker's hat-trick against Aston Villa sealed a 20th top-flight title for Manchester United.

It ended a wait of almost a decade for Van Persie, who did not win the Premier League in eight years at Arsenal.

"I had to wait so long for my first title. It is a great feeling," he said.

"This is a fantastic team and fantastic players. It is a championship for every single one of them. The staff, the managers, the physios.

"It is unbelievable," said Evra.

"It was really important to get back that trophy because I remember last year when we lost and people said Manchester City would take control.

"I said then that when Manchester United got back their consistency they would finish 10 points clear, I was wrong because now it is 16."

The 39-year-old has now won his 13th title with the club, and he said: "Every one is special because you work hard in the season and especially after the disappointment of last year.

"Nights like this one drive us. You want to feel like you do now, you want to see Old Trafford bouncing and that is what spurs me on.

"I am lucky enough to have played under the greatest manager that has ever lived and he drives everyone on. I just want to go on as long as I am enjoying it."

United striker Wayne Rooney, 27, who set up Van Persie's second against Villa, said: "We won this game in the first half and it is a fantastic night for us.

"When you lose the title, it is hard to take. It wasn't a nice feeling last time. We have all dug in deep and done fantastic to put ourselves in this position.

"You can never take anything for granted in football and thankfully it is now done. The manager has great desire and a winning mentality. We all buy into that and want to do well for the club.

"It has been a great season for me. We have won the league title, that is what you play for."

Midfielder Michael Carrick, 31, added: "The league wasn't won [on Monday night], it was won all season with all the work we have put in."