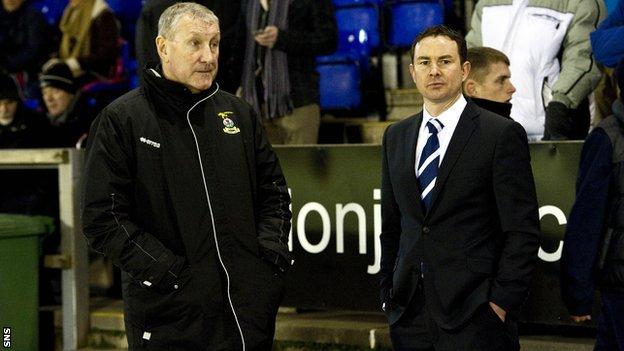 Highland rivals Terry Butcher and Derek Adams will be among the front-runners for PFA Scotland manager of the year, according to Gordon Strachan.

The Scotland boss was launching the ballot for this season's award.

He picked out the Inverness and Ross County managers for praise, while extolling Neil Lennon's work at Celtic and Motherwell's Stuart McCall.

Strachan also had words of praise for Allan Johnston, who won a league and cup double with Queen of the South.

The managers of Scotland's 42 senior sides will cast their votes, along with Strachan, with the winner announced at PFA Scotland's awards dinner on 5 May.

Lennon has won his second consecutive SPL title, reached the last 16 in the Champions League and steering Celtic to the Scottish Cup final.

Butcher, who turned down an approach from Burnley in January, rebuilt his squad on a meagre budget and led Inverness to their first top-half finish in the Scottish Premier League, with Caledonian Thistle also pressing for a European place.

Adams, last year's PFA Scotland manager of the year, has done remarkably well in County's debut season in the top flight, with an 11-match unbeaten run securing a place in the top six.

And McCall, who is on Strachan's coaching team with Scotland, has taken Motherwell to second place in the SPL with four matches remaining.

"There are good candidates," said Strachan. "Obviously, Lenny for his good work winning the championship and getting to the stages they got to in the Champions League.

"Then you have big Terry. He had limited resources and a bad start to the season but came back to do well and produce good players that people are interested in.

"Then you have Derek Adams, who has taken Ross County as high as they have ever been. And Stuart McCall obviously. I saw Motherwell against Dundee United the other night and it was a fantastic performance.

"There is also Allan Johnstone at Queen of the South and they have all got credentials that are good. We have never been short of good managers in Scotland."

Second Division champions Queen of the South were the first team in Britain to seal a league title and have suffered only two league defeats all season.

The Doonhamers then added the Ramsdens Cup to their trophy haul, beating Division One winners Partick Thistle in the final.

Johnston's achievements in his first season in management have resulted in the former Hearts and Rangers winger being linked with other clubs, but the 39-year-old has signed a new one-year deal at Palmerston Park.

Lennon played and coached under Strachan at Celtic and the Scotland manager is concerned that off-field "nonsense" has possibly detracted from his achievements.

"There are others things that have blinded football supporters from the actual football this year," explained Strachan.

"Everything that is involved in the madness of the Scottish game takes it away from the football itself. It's not the football's fault, it's the nonsense that goes on sometimes.

"There have been headlines that are not about football and I'm scared to think about the number of pages written about things outside football. You could probably take away the Amazon rain forest with it all.

"I don't think people are trying to take away from what Celtic achieved, it's just the other things were taking up space."