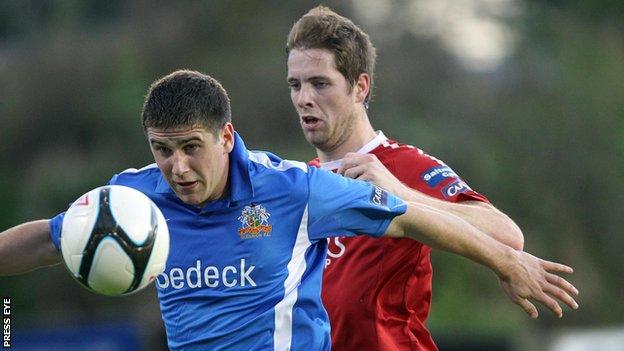 Highly-rated central defender Mark Haughey has agreed a two-year contract with Linfield after passing a medical.

The 22-year-old from Newry had signed a pre-contract agreement with the Windsor Park club after turning down the offer of a fresh deal with Glenavon.

Haughey's form in the Irish Premiership attracted the interest of several clubs and he had a trial with League One side AFC Bournemouth in January.

"I'm obviously delighted to be signing for what is the biggest club in the country.

"I was very impressed with the plans of the manager and his staff to take the club forward, after what has obviously been a disappointing season for everyone.

"Their plans to bring success back to the club really impressed me.

Haughey missed most of the 2011/12 season after breaking a leg in a league game against Coleraine.

His arrival will be seen as a key signing for Blues boss David Jeffrey, following the departure of Albert Watson to Canada in February and the retirement of the long-serving William Murphy at the end of the season.

Linfield, double winners for six of the previous seven seasons, finished the season third in the Premiership and without a trophy.