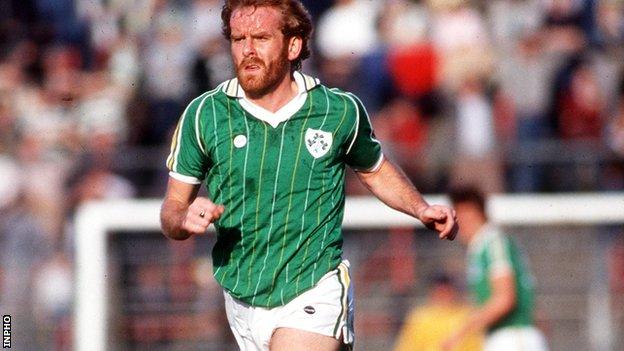 Former Republic of Ireland midfielder Tony Grealish, who captained Brighton & Hove Albion in the 1983 FA Cup final, has died at the age of 56.

Grealish, who won 45 international caps between 1976 and 1986, had been battling against cancer.

The Londoner made over 170 appearances for his first club Leyton Orient before moving to Luton Town in 1979.

He signed for Brighton in 1981 and led them out at Wembley to face Manchester United in the final two years later.

It remains Brighton's only appearance in the cup final and the team, under manager Jimmy Melia, drew the first match 2-2 before Ron Atkinson's United won the replay 4-0.

Grealish went on to play for West Bromwich Albion, Manchester City, Rotherham United and Walsall before finishing his playing career at Bromsgrove Rovers in 1993.

He scored eight goals for Ireland during his decade playing for the national side.

Grealish was given his first Republic cap by then player-manager Johnny Giles but made his greatest impact in the green jersey during the reign of Eoin Hand.

A hard-working midfielder, Grealish played alongside the likes of Liam Brady and Frank Stapleton in the Republic side which narrowly missed out on qualification for the 1982 World Cup finals.

They earned home wins over beaten 1978 World Cup finalists Holland and France during the 1982 qualifying campaign but a controversial defeat in Belgium left Hand's side missing out on a place in Spain on goal difference.