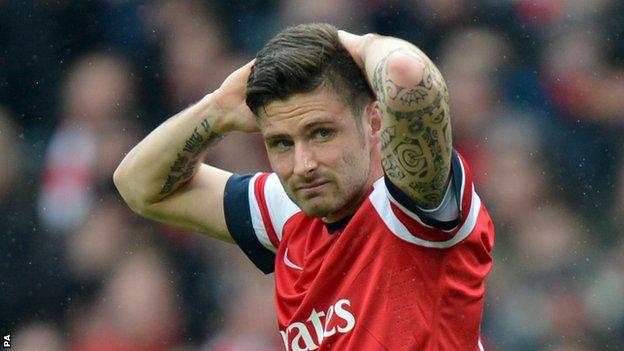 Arsenal striker Olivier Giroud will serve a three-game ban after he lost an appeal against his red card in Saturday's 1-0 win at Fulham.

The 26-year-old France international was sent off late on for a foul on Stanislav Manolev but claimed he slipped as he went for the ball.

He will next be available on the final day away to Newcastle.

Giroud will miss games against Manchester United, QPR and Wigan as the Gunners chase a Champions League spot. They are third with 63 points, two ahead of Tottenham, who have a game in hand, in fifth.

He has scored twice during the Gunners' six-game unbeaten run in the league - in a 4-1 win against Reading and the 3-1 victory over Norwich, and has scored 17 goals in total since his summer switch from Montpellier.