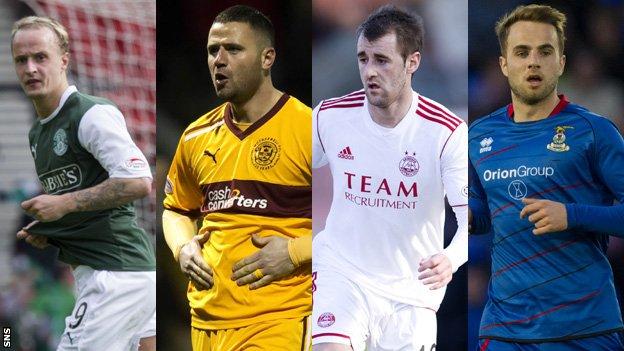 Shinnie has starred for Inverness, while Griffiths, Higdon and McGinn have been prolific scorers for Hibs, Motherwell and Aberdeen, respectively.

Griffiths is also up for young player of the year, with Celtic's Victor Wanyama and Dundee United duo Stuart Armstrong and Gary Mackay-Steven.

The last player to win both awards in one season was Aiden McGeady in 2008.

Footballers from across Scotland's four senior leagues have cast their votes and it will be the first time in 23 years that the main award will go to a player from a club other than Celtic or Rangers.

Aberdeen's Jim Bett was the last non-Old Firm player to collect the accolade in 1989-90.

But Wanyama was shocked that none of his team-mates were among the shortlist for the main award.

"The likes of Fraser Forster and Gary Hooper, a lot of players have had a very good season and I'm just gutted they are not here with me."

McGinn, who was previously at Celtic Park, thought that Wanyama himself would be a good candidate for the main award.

"You've got to look at their run in the Champions League and I thought big Victor might have got in there, or the likes of Kris Commons with his goals and consistency," said the player who has scored 19 goals for the Dons this season.

"But obviously it is not down to me, it is down to your fellow professionals.

"Personally, it's been an unbelievable season for me. I've been playing in a new position and had a new lease of life, probably the best year of my career."

Higdon, 29, leads the Scottish Premier League scoring charts and has 25 goals in all competitions, while Griffiths, 22, has matched that number in his second season on loan at Easter Road from Wolves.

Shinnie, 23, has 15 goals from midfield and his sparkling form has won him a summer move to Birmingham City under freedom of contract.

The player saw the nomination as the "icing on the cake" in a season during which Caley Thistle presently lie an unprecedented third in the top flight.

"Everybody seems to think we exceeded expectations, but from pre-season I realised we had quite a young squad with a few experienced players and I thought we could do well this season if we stayed injury free and we've had hardly any," he said.

"There's a few games to go in the season and, if we could clinch a European spot, it would be fantastic for the club."

The winners will be announced and presented with their awards at a dinner and ceremony in Glasgow on 5 May.