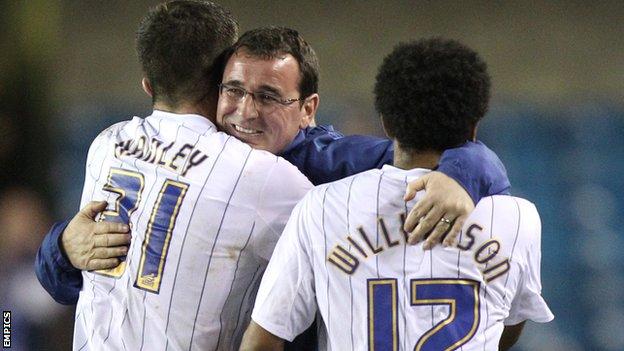 Caretaker manager Gary Bowyer has called on Blackburn's players to remain focused now they are one win away from Championship safety.

Rovers won 2-1 at Millwall on Tuesday evening - a result that moved them five points clear of the relegation zone with two games remaining.

"We've got to stay calm, positive and stick together to try and get over the line on Saturday."

He added: "Psychologically this will help us with the confidence going into the game,

"If we can keep the winning form that would be great as it's the last home game of the season. We would like the supporters to come out as it's been a collective effort."

Following the 3-2 loss at Sheffield Wednesday at the start of April the Ewood Park side sat in the relegation zone, but three wins in the last four games have taken them to the verge of safety.

"He was outstanding and the run [which led to a penalty] typified his performance," Bowyer told BBC Radio Lancashire.

"Every year he has been at the football club he's got better, and he's now a full Scottish international, and that performance was magnificent."