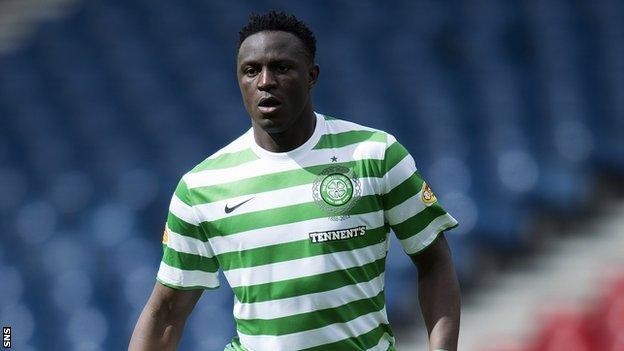 Victor Wanyama thinks he will still be a Celtic player next season.

The Kenya midfielder has been tipped to move to a richer club since starring in Celtic's Champions League group-stage win over Barcelona.

And manager Neil Lennon has admitted he might despite back-to-back title wins.

But Wanyama, who has been said: "I love it here at Celtic, so I'll be here next season."

In October, Lennon revealed that Wanyama had rejected the offer of a new contract beyond the four-year deal he signed when joining Celtic for £900,000 from Beerschot in July 2011.

"I've not really spoken to my agent as I have been playing my football and I have not had any thoughts about leaving," said Wanyama.

I still have a contract at Celtic and I'm happy at the club, so I think I will still be here

"I feel like I'm at the right club. I still have a contract at Celtic and I'm happy at the club, so I think I will still be here."

Now the Kenyan is delighted to be chosen by his fellow professionals in Scotland as a candidate for the PFA Scotland award.

"It means a lot to me," said Wanyama, who is up against Hibernian striker Leigh Griffiths and Dundee United midfielders Gary Mackay-Steven and Stuart Armstrong.

"I had a good season and I'm just happy to be recognised like this."

Wanyama is hopeful that he can be part of a Celtic team that can again qualify for the Champions League group stage.

"We want to do better than this season," he said. "So if we can win the treble next season then it would be a very good achievement for me.

"That's my dream for next season."