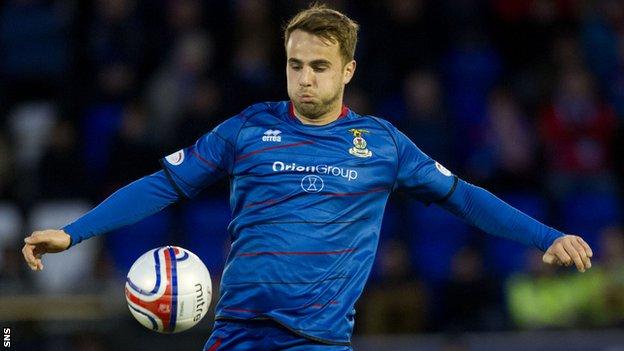 Birmingham City-bound Andrew Shinnie says it will not be easy to leave Inverness Caledonian Thistle but thinks the time is right for a new challenge.

The 23-year-old has to move to the Championship club in the summer.

"Obviously it's a burden to leave," he said. "There's a lot of good things at Inverness. The boys are great.

"But I just want to go down and prove myself all over again to new fans, new players, new management."

Shinnie, who is among a , admits that it would be particularly hard to leave Graeme, his brother and team-mate, behind.

"It has been amazing to be able to play with my brother in the same team, which is something not a lot of people get," he said.

"That's a massive thing as well. I've lived with him for two years since I've been there, but I think he's replaced me with a dog."

It is a massive step up, but it is an opportunity you can't turn down and I've got confidence in myself

Shinnie won his first Scotland cap in November against Luxembourg under caretaker manager Billy Stark and believes moving to England will help him become a regular under Gordon Strachan.

"If you look at the squad, it is mainly English-based players," he pointed out. "It is pretty difficult to get in from the SPL unless you are an Old Firm player.

"I just felt it was the right time to move on and start a new chapter in my career, but I'll always be grateful to Inverness.

"It is a massive step up, but it is an opportunity you can't turn down and I've got confidence in myself."

Shinnie began his career with Rangers, from where he was sent out on loan to Dundee, and he has no regrets about leaving Ibrox and joining Terry Butcher's squad at Caledonian Stadium in 2011.

"I think he's installed that belief by taking me to Inverness and playing me and letting me express myself," said the midfielder.

Shinnie struggled physically in his early career and admits he wondered if he would ever be injury free.

"There were a couple of problems with my feet, but I got that sorted from a top surgeon in London and this season I've started every game Inverness have had," he said.

"It was a memorable season already and then I heard about getting the nomination and it's the icing on the cake."