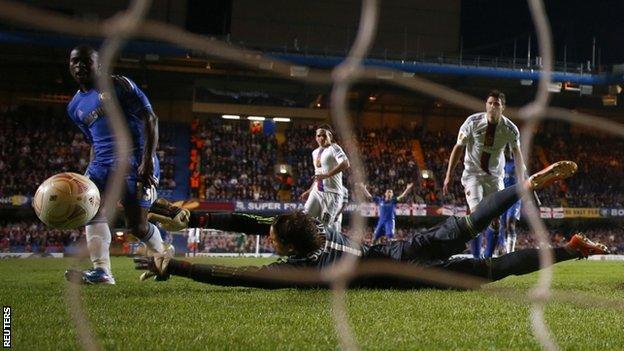 Chelsea secured their place in the Europa League final against Benfica with an ultimately comfortable win over FC Basel at Stamford Bridge.

The Swiss side, attempting to reverse a 2-1 deficit from the first leg of their semi-final, gave Chelsea brief moments of anxiety, especially when Mohamed Salah gave them the lead on the night just before half-time.

But Fernando Torres put Chelsea back on track with his 20th goal of the season just after half-time and Victor Moses removed any remaining doubts with a second two minutes later.

"There were lots of positive things for Chelsea to take from tonight. They didn't celebrate as though they had just got to a European final. The reason? Because they've got another almost-final on Sunday against Manchester United."

David Luiz, Chelsea's match-winner in Basel, then produced the sort of spectacular 25-yard strike that is fast becoming his trademark to add gloss to an evening of celebration at Stamford Bridge.

Benitez, who claimed this trophy in its guise as the Uefa Cup with Valencia in 2004, was able to put aside the continuing speculation about the possible return of Jose Mourinho to Stamford Bridge by adding to his own reputation as a European specialist.

Chelsea's fans chanted for Mourinho's return throughout - but there was not a flicker of recognition for the man who picked up the reins towards the end of the London club's calamitous defence of the Champions League and now has the chance in Amsterdam to win European football's consolation prize.

Benitez may not have won favour from Chelsea's supporters - he is now accepted in grudging silence - but he surely deserves credit for taking them to a major final whilst also guiding them into a favourable position to finish in the Premier League's top four.

Basel, defeated 2-1 at home last week, needed to score to have any hope and should have got the early goal they so craved inside the first 50 seconds, only for Marco Streller to scuff an angled shot wide with only Petr Cech to beat.

With John Terry on the bench, Frank Lampard had taken the captain's armband - and he was almost celebrating a piece of history after only eight minutes but the post stopped him equalling the Chelsea club record of 202 goals held by Bobby Tambling.

Torres was looking lively and he almost gave Chelsea the lead when a swift exchange of passes with Eden Hazard ended with the striker bringing a low save from keeper Yann Sommer.

Basel were enterprising and Streller was only inches away from giving them the lead on the night with a flashing angled volley that flew just wide.

As both sides created opportunities, Ramires brought another save from Sommer but it was Basel who went ahead seconds before half-time.

Salah had already wasted one chance to score when he was blocked by Cech but he made no mistake when he was played in by Valentin Stocker, converting with a cool finish.

Chelsea needed to react after the interval - and they did so in such spectacular fashion that their place in Amsterdam was sealed before the hour.

Torres, a regular Europa League marksman this season, equalised in the 51st minute when he reacted first to turn in the rebound after Sommer failed to hold Lampard's shot from the edge of the area.

The Blues were well on their way to the final two minutes later when Torres's shot bounced off a Basel defender and fell invitingly for Moses, who scored at the second attempt from six yards.

If there was any lingering hope in Basel hearts, it was snuffed out by another piece of instinctive brilliance from Luiz, who took Lampard's pass before curving a wonderful left-foot finish into the top corner with Sommer motionless.

Basel still mustered the energy to attack and Fabian Frei struck the woodwork with Cech beaten as his shot took a glancing deflection off Branislav Ivanovic. Sereh Die also forced a save from the keeper but it was all in vain.

Now, despite the disappointment of their early Champions League exit, Chelsea have the opportunity to bring a European trophy to Stamford Bridge for the second successive season.