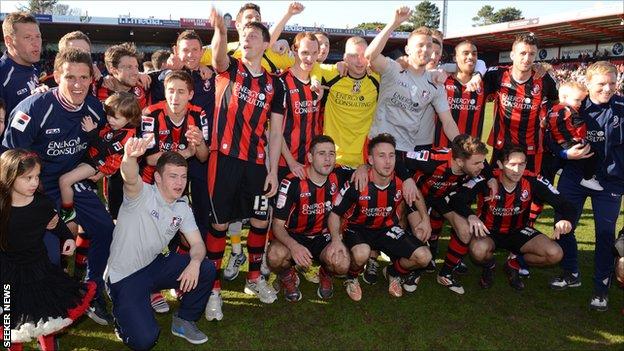 The Dorset side won promotion to the second tier of English football for the first time since 1987 last weekend and could win the title on Saturday.

Williams was part of the 1987-promotion winning squad but believes Eddie Howe's side are better than Harry Redknapp's.

When asked if this was the best Bournemouth team ever, Williams told BBC Radio Solent: "Without a doubt."

I think this team could do a decent job in the Championship. You can always improve but the squad is there - they can go onto another tier

He continued: "There is no doubt about it. They are pleasing on the eye, they can defend, but most of all it is the way this team can attack. Usually a team has a strong side [flank] in which they can attack - this team has two strong sides through both full-backs and wingers.

"We've got [Brett] Pitman up front who can't miss at the moment, the two centre-halves are fantastic, the goalkeeper has come in and looks a real find and there are good players throughout the side.

"They are really good to watch and they are pleasing on the eye when they go forward."

This year's success means the Cherries will be appearing in English football's second tier for only the second time in the club's history next season - and Williams believes Howe's side will flourish.

Williams, who now works as a summariser for BBC Radio Solent, also says the 1987 team he played in was completely different to this promotion-winning squad.

"This team is a different kettle of fish to the Harry Redknapp team," he said.

"Everyone knows Harry loves to play football. I think it was the season after that the team came into its own and played some really good stuff. But the 1987 season we were very resilient and economical.

"When we went a goal ahead that was usually it, even though we had flair players such as Richard Cooke, Mark O'Connor and Carl Richards."

"It's all very well having the right players but you have to build them together as a team and get the balance right. It's not easy and all credit to Eddie, Jason [Tindall] and the squad because this is a special time for Bournemouth.

"We can go on to bigger and better things. I think this team could do a decent job [in the Championship].

"You can always improve but the squad is there - they can go onto another tier."