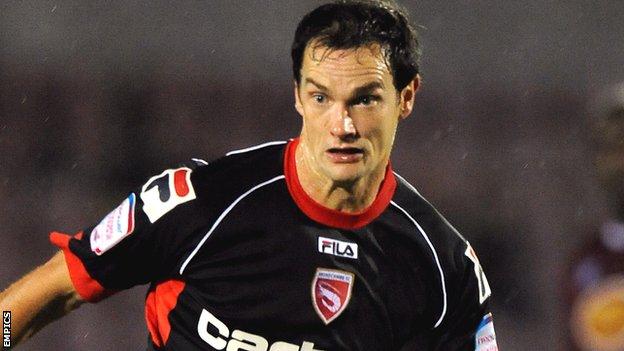 The 37-year-old, who played 50 times for the Shrimps last season, will again combine his role as a player with that of reserve-team manager.

Drummond told BBC Radio Lancashire: "You need to start looking towards the future. Although you'd like to, you can't play forever.

"I'm enjoying the bits and pieces I'm getting with (manager) Jim Bentley."

He continued: "At this moment in time, it's the route I'd like to go down. If it all works out, that would be great.

"It's a bit of concern as to when the playing side of things is going to finish, especially when you get to my age.

"It's about knowing when you don't think you're contributing enough and you don't want to be seen as playing on too long or taking the place of someone else who might be coming through. Touch wood, I don't feel that way.

"I feel fit enough and I feel I'm still contributing so it was quite an easy decision to carry on."

Drummond began his career with Morecambe, his first spell at the club lasting more than a decade.

After stints with Chester and Shrewsbury, both lasting two years, Drummond rejoined the Shrimps in January 2008.

"Stewart was one of our most consistent performers last season," Bentley told the club website. "He continues to defy his years as one of the fittest players at the club and he has the experience we need."