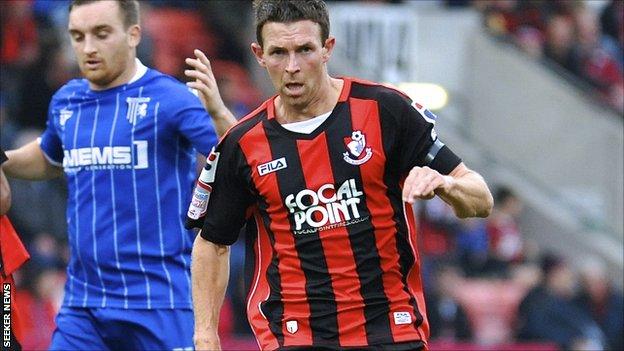 Premier League side West Ham have been named as the opponents for Bournemouth defender Stephen Purches' testimonial.

The Hammers visit the Goldsands Stadium on 13 July for what is likely to be the Cherries' first pre-season friendly ahead of their Championship campaign.

Purches, 33, spent 10 years with West Ham before joining Bournemouth in 2000.

"It's great news. West Ham is where I started my career and it's a club that means a great deal to me," said defender Purches.

At West Ham Purches played alongside Frank Lampard, Michael Carrick and Rio Ferdinand at the famous West Ham academy before being handed his first professional contract by Harry Redknapp.

England international Joe Cole is the only player left at Upton Park from Purches' days as a trainee with the three-time FA Cup winners, and he could be joined by new signings with manager Sam Allardyce planning for a second season in the Premier League.

Purches signed for Bournemouth in 2000, but joined Leyton Orient in 2007 and returned to the Cherries in 2010.

He has made over 300 appearances in two spells on the south coast, and most notably scored in the 2003 play-off final win at the Millennium Stadium, which secured promotion to the third tier.

"It has come together perfectly and I couldn't have picked a better team to come down for my testimonial game," he added.

"But it will also be an important game for us and the first chance for the supporters to see the team next season and maybe a few new signings too.

"Lots of people have been asking about who would be coming down and I'm really pleased it's out there now. I can't wait."

Purches has made encouraging progress in recent weeks in his rehabilitation from a long term injury and is optimistic about his chances of featuring in the game.

"I'm not at a stage where I can join in full training yet, but I've started doing ball work and things like that rather than straight line running," he said.

"Fingers crossed everything is heading in the right direction."

No tickets are available for the game yet, but prices and hospitality packages will be announced in due course.