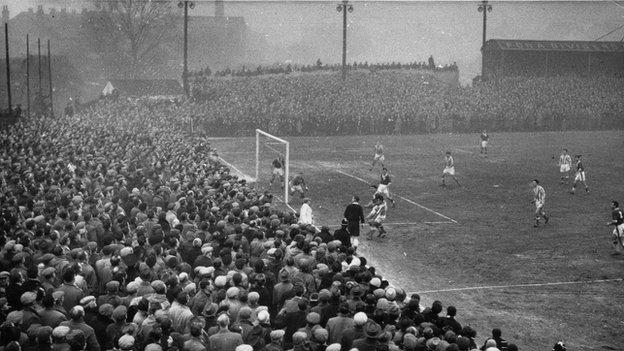 Worcester City bring down the curtain on 108 years of football at St George's Lane when they play Blue Square Bet North champions Chester on Saturday.

Who are Worcester City?

Next season, with their ground sold for redevelopment, they will play their football 13 miles up the A449 at Aggborough, home of local rivals Kidderminster Harriers.

And, although at the moment, their hopes for the future are no more than pipedreams, the long-term plan is to one day return to the city.

City will leave behind a lot of memories for their fans, most notably their finest hour when, on 15 January 1959, they knocked Liverpool out of the FA Cup in a third-round tie in front of a crowd of 15,000.

The local folklore is that it was the defeat which cost Liverpool manager Phil Taylor his job and led to the appointment of the legendary Bill Shankly, triggering the start of the famous 'Boot Room' dynasty at Anfield.

The reality is that actually happened 11 months later - and Liverpool were only a Division Two club at the time, but they do say, 'never let the facts get in the way of a good story'.

There are certainly plenty of tales told about that famous day, which, for all Kidderminster's later FA Cup-fighting exploits, still ranks as the biggest in Worcestershire's football history.

Among those crowding into the stadium that day was schoolboy Peter King, who was destined to play for Worcester and later, at the highest level, for Cardiff City.

King is now 70 and living in Spain, but he will never forget that cold winter afternoon at St George's Lane.

"Liverpool were in the second division in those days, but nevertheless it was a fantastic victory.

"The game couldn't be played on the Saturday as the pitch was waterlogged as per usual, so they played in the midweek and we all had time off school to go to watch it.

"I can remember being there with some of my schoolmates and we thought it was an unbelievable day for Worcester City."

The teenage King was already starting to attract attention from Football League clubs - Bolton Wanderers and Brentford were among those keeping a watchful eye on him - but it was Cardiff who made the first move.

"Although St George's Lane is soon to be lost forever, maybe a new spirit for this great club is about to be found.

"After the final whistle blows on Saturday I will leave with a lump in my throat, but also with hope in my heart that the fans will continue to support the club through their Aggborough exile and work together to bring them back to the city of Worcester soon.

"As a lifelong City fan who grew up in the shadow of St George's Lane, spending the last few years commentating on every match for BBC Hereford & Worcester has been a pleasure and a privilege.

"My first memories of 'The Lane' are peeping through holes in the fence alongside the canal towpath to glimpse the action underneath the floodlights before climbing over at the side of the Shed to get a proper view of my early City heroes like Micky Tuohy, Paul Moss and John McGrath playing in the Alliance Premier League.

"I started my stint as City commentator during Andy Preece's tenure, although sadly not in time to cover the televised FA Cup tie against Huddersfield in 2005.

"This has always been my favourite ground to commentate from and the wooden hut at the back of the main stand has become almost my second home over the past few years."

Dan Johnson, home and away commentator on City games for BBC Hereford & Worcester

Cardiff were by then managed by former Worcester boss Bill Jones, who had masterminded that win over Liverpool and still had strong connections with the club.

As a youngster, King was very green when it came to salary negotiations, so he sought advice from one of the senior players at Worcester, Sammy Bryceland.

"We got on really well and he said to me: 'Whatever they offer you, say no because there is more - they are bound to offer you more'.

"Part of the deal involved Harry Knowles, who had been in that City side that had beaten Liverpool.

"When Bill Jones had gone down to Cardiff he had taken Harry Knowles with him, but Harry was in his twenties by then and maybe it was a bit late for him to make the grade.

"Harry was looking to come back to City and I was going to be the makeweight.

"Bill Jones showed me around Ninian Park and then said: 'We'll offer you £12 10 shillings per week', but I remembered what Sammy Bryceland had said so, much to Bill Jones' surprise, I told him: 'Can I think about it?'

"Harry was there and he asked me 'Is it all sorted out?'. I told him I was still undecided, but I knew what I wanted to do so I went back in again and told Bill Jones I was going to sign.

"Bill later told me that, if I had asked for more, we wouldn't have done the deal because there was another 17-year-old in the first team on £12 10 shillings.

"I'm glad I ignored Sammy's advice, or I might never have had 13 seasons at Cardiff City."

Like all who have played for, watched and reported on Worcester City, however, it is St George's Lane that will be uppermost in their thoughts this weekend.