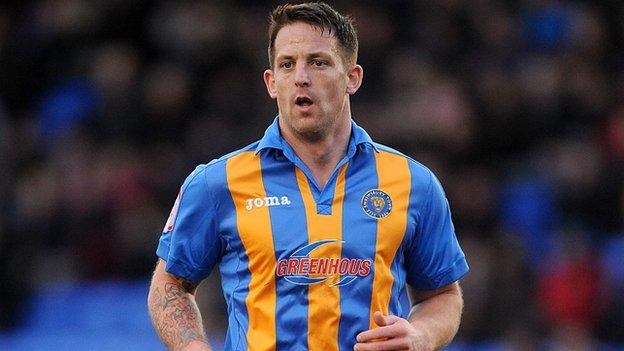 Shrewsbury Town hope that Darren Jones will be fit for pre-season, having this week successfully undergone surgery.

Jones injured his shoulder at Carlisle on 29 March, ruling him out of Town's final seven games - and the club feared that he may face a longer lay-off.

But Shrewsbury are unclear over fellow defender Jermaine Grandison, who aggravated his hip injury in Saturday's return after three months out.

Jermaine Grandison's going to see a specialist again. We'll see what the prognosis is, whether surgery is necessary

As for Jones, Turner is relieved, having initially suggested that the 29-year-old Welshman could face a six-month absence.

"Darren has had his surgery and has started his rehab, and will be following a fitness path over the summer," added Turner.

"We believe he'll be ready to join training before the start of next season.

"Darren is also getting married in the close season. We have laid out a plan in order to make sure we reach each marker we want to hit."

The summer signing from Aldershot's dislocated shoulder in the 2-2 draw at Carlisle on Good Friday followed the loss of on-loan defenders Cameron Gayle (hamstring) and Rob Edwards (thigh).

Grandison, who lasted 75 minutes on his comeback on Saturday, suffered his original injury in the 2-0 defeat at Swindon Town on 19 January.

Having successfully avoided the drop from League One, Town complete their season at home to relegated Portsmouth at the Greenhous Meadow on Saturday at 15:00 BST.