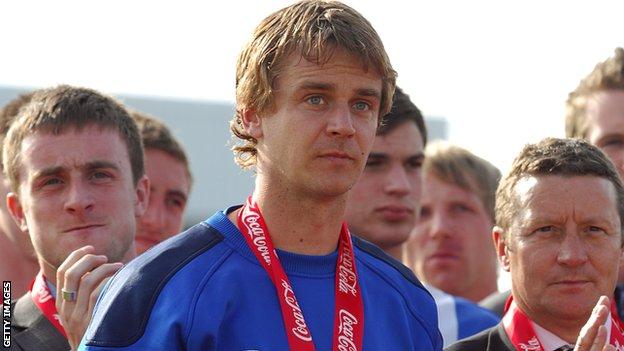 Hartlepool assistant manager Mickey Barron has claimed there is not much difference in quality between League One's top and bottom clubs.

Pools were relegated in mid-April but have since held automatic promotion-chasers Brentford to a 1-1 draw.

"It was tough having already gone down but for half an hour we dominated and all game you couldn't see who was third in the table," Barron told BBC Tees.

The gap from top to bottom

The points difference between leaders Bournemouth and fourth-bottom Scunthorpe is currently 36, the smallest since 2006. Hartlepool were 21st that year, just 30 points behind champions Southend who reached 82

"They're the margins of League One - we've been on the wrong end of them."

Barker scored the goal that won promotion to League One in 2007 before turning his hand to management with Bury in 2011.

"Richie has done a terrific job at Crawley and did so at Bury too," Barron added. "I was speaking to him early in the season and he was thinking about automatic promotion.

"It's so tight though. They had to sell a couple of players and suddenly were out of it.

"Crawley are very tough at home but we're prepared. The lads showed last week just how much they still want to work and play for Hartlepool United."