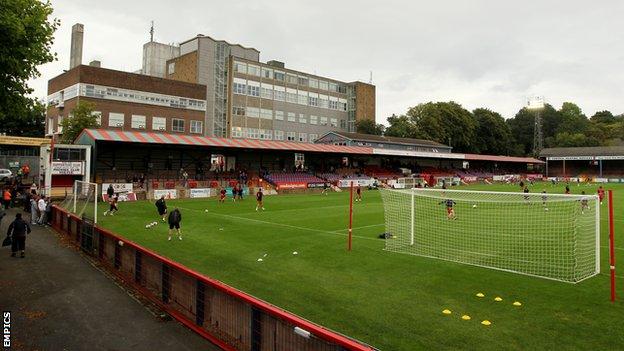 Aldershot Town chairman Shahid Azeem says the club faces a crucial 48 hours as they look to avoid going into administration.

Azeem, Shots owner Kris Machala and directors of the League Two club held a meeting with fans on Thursday.

Azeem said "a huge step" had been made in talks about their finances.

Machala confirmed that talks with a potential new investor for the EBB Stadium outfit had collapsed after a deadline passed on Thursday afternoon.

Thursday night's meeting had been called by Graham Brookland, the president of the Shots Supporters' Trust and also the club's head of media, to air his concerns over the way Aldershot are being managed and the direction they have taken in recent months.

Also in attendance were 24 prominent and long-standing supporters of the club, including founder Terry Owens and all-time leading goalscorer Mark Butler.

Brookland described this season, which sees the Shots on the brink of relegation from the Football League, as "the worst in the club's history".

Majority shareholder Machala was replaced as chairman by Azeem in February.