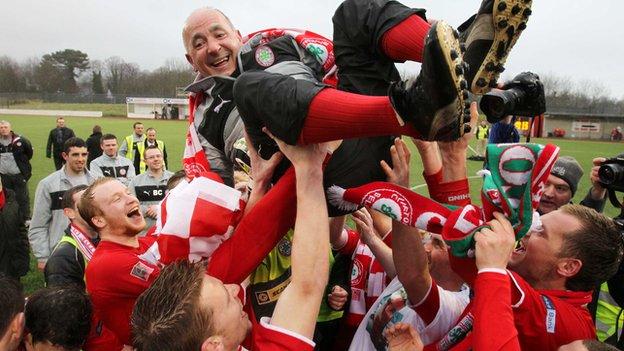 Cliftonville manager Tommy Breslin says he will field a strong team against Ballinamallard on Saturday - despite having the league title wrapped up.

The Reds have lost two of their three games since clinching the league crown and they will be presented with the trophy after Saturday's game.

Ballinamallard hope to repeat their surprise early-season win at Solitude.

Victory would mean a fifth-place finish for Whitey Anderson's men in their first season in the Premiership.

The battle for a place in the Premiership play-off is the highlight of Saturday's Sportsound on Radio Ulster.

The programme features up-to-the-minute reports on all six Premiership fixtures.

Cliftonville skipper George McMullan will get his hands on the Gibson Cup after the game and it should be quite a party for a club which last lifted the trophy in 1998.

Although promising a strong line-up, Breslin is likely rest some of his title-winning stars with the Irish Cup final against Glentoran coming up on 4 May.

Midfielder Barry Johnston and front man Diarmuid O'Carroll are definitely out with one-match bans for amassing five bookings in a season.

Second-placed Crusaders complete their campaign with a trip to deposed champions Linfield, who have finished third.

Veteran striker David Rainey is set to play his last match for the Crues as he, along with midfielder David Gibson, has not been offered a new contract for next season.

Relegated Lisburn Distillery's last match in the Premiership is a trip to face Portadown at Shamrock Park.

In the Championship, the big clash is between Institute and Warrenpoint Town who are involved in a fight to finish second and earn a place in the promotion play-off match.

They are level on points with two matches left and Institute have a slightly better goal difference.

So the winners will be favourites to take on Premiership side Donegal Celtic with a place in next season's top flight on the line.

The first leg of the play-off is to be played on Friday, 10 May and the second on Tuesday, 14 May.