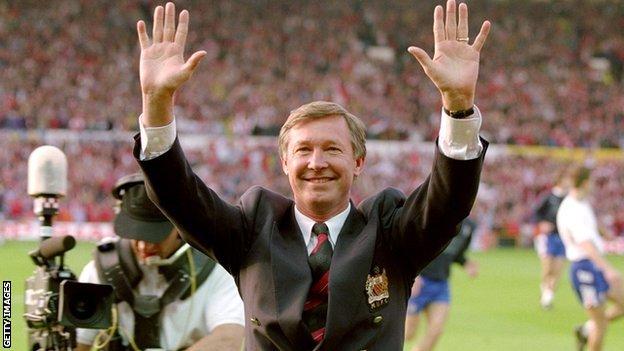 His name will mean nothing to you but, exactly 20 years ago, Manchester United fan Michael Lavender entered footballing folklore by playing his part in his club's glittering history - and he has the letter from Sir Alex Ferguson to prove it.

The date was 2 May, 1993. There were two games of the inaugural Premier League season remaining and the title race was about to be decided.

However, the scene of victory would not be Old Trafford but Mottram Hall, a golf course in Cheshire.

Ferguson was desperate to secure his first English league title and United's first since 1967, but to escape the tension the day before United played Blackburn, he had gone to play golf rather than watch their only remaining challengers, Aston Villa, play Oldham live on TV.

As Ferguson describes it, he was on the 17th green when a car screeched to a halt nearby and he heard footsteps on a gravel path. "A man I didn't know came over the hill with a huge smile on his face and said: 'Excuse me Mr Ferguson, you are the champions. Oldham have won at Villa.'"

That man was Lavender and he would become the most famous 'stranger' in football.

During the next two decades of United success after United success, his tale has been repeatedly referred to by newspapers and broadcasters when they recall how that first Ferguson title was 'won on the golf course'.

He was also mentioned in various publications, including United's official illustrated history and the legendary Scot's autobiography.

Many thanks for your letter and indeed you are obviously that famous stranger that made my day! As I never saw you again, you are part of the folklore of that great day

Nobody knew Lavender's name, but Ferguson never forgot him. Which is why, when Lavender got in touch in 2007 to disclose his identity as the "man he didn't know" on that decisive day, Ferguson sent him a warm letter of appreciation in reply.

That letter now takes pride of place on the wall in the bistro at the hotel that Lavender, aged 66 and a lifelong Red, runs in Poitou-Charentes, France.

It read: "Many thanks for your letter and indeed you are obviously that famous stranger that made my day! As I never saw you again, you are part of the folklore of that great day."

Lavender remembers clearly how events unfolded and told BBC Sport: "I'd finished my round and came into the bar to have a beer. The Villa game was on a TV in there and the commentator said something like 'Alex Ferguson does not even know he has just won his first title'.

"The guy sitting next to me was one of the junior professionals at the club and he said 'yeah, because he's out here playing golf'.

"So I asked him what time Ferguson had started his round and made a mental note because I was then leaving. Mottram Hall has got this long driveway in and out and, as I was driving out, I thought to myself that he might be around there somewhere.

"I looked up to the 17th green and saw him. So I stopped the car and climbed up to the raised green and, apparently in a very polite manner, told him the good news.

"First of all, he did a double take because he wanted to make sure I wasn't taking the mickey. As soon as he was satisfied with that, he just went absolutely crazy. He was so happy, he started shouting and dancing around with his playing partner, who I later found out was his son Mark.

"I just thought well, this is his moment, not mine, so I left them to it. The rest is history."

Lavender, a former United season ticket holder and "massive fan" who lived in the Manchester area before moving to France in 2005, shared his story with friends and family but it was many years later when somebody told him that he was mentioned in Ferguson's autobiography.

What Ferguson did next...

"The next shot was abandoned and as we made our way back down the 18th fairway, my thoughts went back to 1962 when Arnold Palmer won the Open at Troon.

"I'll never forget the sight of him marching between the massed ranks of his fans towards the last green. That's how I felt, like a real champion, as I strode up that fairway."

"I decided to reveal myself," Lavender said. "So I wrote to him, half thinking I might get a ticket for a game or something, and I got that really nice letter back which was a nice surprise.

"I identified myself by describing things I thought he might remember about the details of the scene on that famous day and where and how I approached him.

"When I got back in my car to drive home that day, another guy arrived and went up to Ferguson as well. I remember the talk at the golf club was that he was the first to tell him, but he wasn't - it was me."

Since 1993, Ferguson has seen his side seal titles while watching snooker (1994) or at the gym (1997) as well as on the pitch. No matter how he has triumphed, though, it has not compared with the elation of that first success.

"Every time you win the title it is special," Ferguson said immediately after beating Villa 3-0 on 22 April to clinch his latest crown. "But the first one was the best one because it took away all the pressure at the club for us for many years and really opened the door for us."

Did Lavender expect Ferguson to still be at the top, 20 years on? "It's amazing," he said. "That first title is a long time ago now but he is clearly an amazing man. He just keeps on winning and he knows how to take his teams to the pinnacle.

"It was a shock that he remembered me. So many things happen to people like him in all his successes down the years and it is hard to imagine how or why he would recall that incident so well.

"But it is great that he did remember and even better that he responded about it."