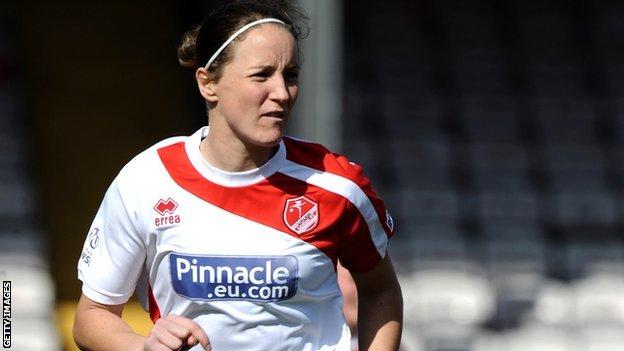 England captain Casey Stoney has an FA Women's Cup hat-trick in sight as she prepares to lead Lincoln out against Bristol Academy in Sunday's semi-final.

Completing the triple would be some achievement for the 30-year-old, capped 105 times by her country.

It would be incredible for me personally to get another Cup winner's medal, especially doing it with three different clubs

So too is the possibility of leading Lincoln to what would be the club's first ever major trophy.

"We've got a very tough semi-final to get through before we can start thinking about lifting the trophy," said Stoney.

"It would be incredible for me personally to get another Cup winner's medal, especially doing it with three different clubs.

"But to do it for Lincoln would make it extra special.

"The men's club haven't been doing too well in recent years, but the women's team has grown and we've got tremendous support.

"We've got a good number of fans going down to Ashton Gate for the semi-final, and we'll be out to make history for Lincoln."

Stoney's club, who become Notts County next season, have yet to appear in a major final, whereas Bristol were FA Cup runners-up to Arsenal two years ago.

They then lost out to last term's winners Birmingham City in the semi-final, and captain Corinne Yorston in particular is desperate for another final appearance.

She said: "I missed last season's semi through suspension, that was a massive disappointment and I owe the club one for that.

"It's going to be difficult to get past Lincoln, who are a very good team with some top international players.

"But we've got our tactics in place, and after starting the new season with three wins out of three our confidence is high."

Stoney, Lincoln's central defensive lynchpin, added: "The two Spanish girls are on fire and we'll have to be right on top of our game to contain them.

"We'll probably go into the game as underdogs, but we've got nothing to lose and everything to gain from what will hopefully be a really good Cup tie."