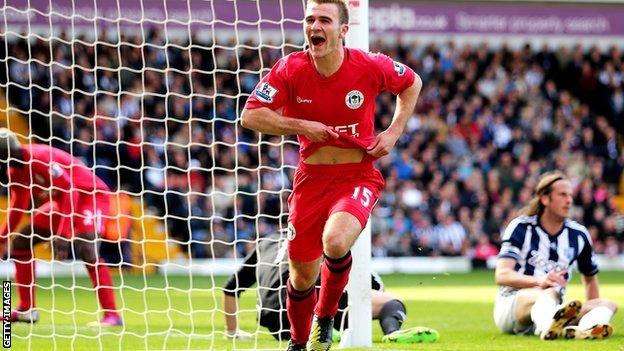 Wigan - who started the day five points adrift of safety with a game in hand - trailed twice at The Hawthorns but maintained their nerve and composure to close the gap on Sunderland and Newcastle United.

Shane Long put West Brom ahead but Arouna Kone headed Wigan level before the interval. Gareth McAuley restored the Baggies' lead but Wigan were back on terms again when James McArthur headed in moments after coming on as substitute.

Wigan manager Roberto Martinez knew only three points would suffice as his side battle once more to avoid the drop into the Championship - and the decisive goal came 10 minutes from time when the outstanding Shaun Maloney set up McManaman from close range.

They survived a scare deep into five minutes of injury time when McArthur headed off the line from McAuley but it was not long before Wigan's fans were celebrating.

An injury to Jean Beausejour, who was taken off on a stretcher with the FA Cup final against Manchester City at Wembley only a week away, was the only black spot on a fine day for Martinez and his team.

They played with the poise of a team well-versed in these high pressure situations - which they are - and have increased the pressure on those around them as the season draws to its conclusion.

"I can't believe Wigan won today. I have seen them play much, much better but they kept fighting and got the win.

The Hawthorns was in celebratory mood prior to kick-off as news of fierce rivals Wolves' relegation filtered through - with a giant mocking banner drawing huge applause.

On the pitch Wigan were desperate for victory while Albion were keen to put further gloss on a very good first season for head coach Steve Clarke.

The dangerous Kone brought a low diving save from keeper Ben Foster but Albion struck first to take the lead in the 29th minute when Markus Rosenberg showed a fine turn of pace to cross for Long to apply a comfortable finish.

Despite the increasing stresses of their situation, Wigan continued to play their trademark studied passing style and worked their way back into contention before half-time.

Maloney drifted a delicate free-kick inches wide but Wigan were soon level. Referee Lee Probert played a superb advantage after Maloney had been flattened by Billy Jones - a challenge that eventually brought a booking - allowing Beausejour to cross for Kone to score with a towering header.

Kone was the villain of the piece when Wigan went behind five minutes after the break, completely losing McAuley at Graham Dorrans's free-kick, leaving the defender to head past Joel Robles.

It persuaded Wigan boss Martinez to make a double change, sending on McArthur and Roman Golobart for Ronnie Stam and Jordi Gomez. The change brought results within seconds as McArthur stretched to score with a diving far-post header from Maloney's cross.

The mood among the home fans turned sour when the unsettled Peter Odemwingie went to warm up as a substitute, with some supporters remonstrating angrily with the striker who had hoped to join QPR in the January transfer window and abusive chants were aimed in his direction.

As time ran out, Wigan pressed and were rewarded as they went ahead for the first time with 10 minutes left. Not for the first time, Maloney's creativity was the source as he jinked into the area and crossed low for McManaman to score.

Robles made a brilliant diving save from Dorrans before McArthur performed heroics at the other end to keep out McAuley's header with virtually the last action of the game - and once more Wigan have their relegation rivals looking over their shoulders.

"We have conceded three goals and we have to look at that. Two of the goals came from crosses and normally our defending from crosses is very good.

"We played an attacking line-up, I chose to go with that so I have to be the one that carries the can for this.

"I'm sure for people watching it was a good game to watch and Wigan are a difficult team to play. Fortunately we are in a position where we can try different things and we scored another two goals but we were a bit exposed at the back."