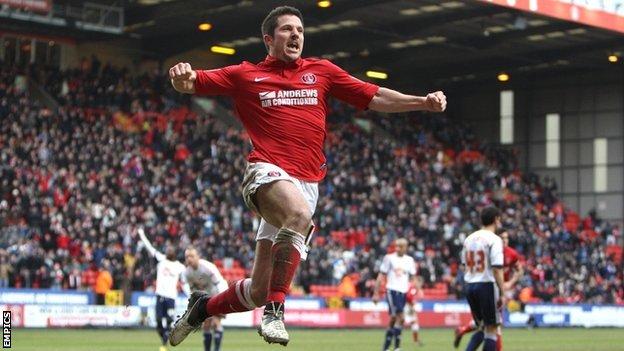 Yann Kermorgant scored twice after half-time as Charlton completed a strong end to their season with victory over already-relegated Bristol City.

The French striker hit the top corner from the edge of the box two minutes after the break and then headed in four minutes later.

City, who finish bottom of the Championship, replied via Bobby Reid.

But 11 minutes from time Kermorgant crossed for Jonathan Obika to head home before Johnnie Jackson tucked in.

Charlton's win extended their late run to eight games unbeaten and they finished the season three points off the play-off places in ninth.

The Robins finished 14 points from safety, with Wolves and Peterborough joining them in League One next term.

"It was a terrific end for us and we did it the right way.

"Seasons have tended to tail off for us and I wasn't going to allow it this time, especially at home.

"We have shown we can play in this league and I am a better manager for it and the players are better for the experience."

"You have to reflect on where you are as a football club and we are trying to address that, not just on the playing field but throughout the whole business.

"We have got to change the culture."