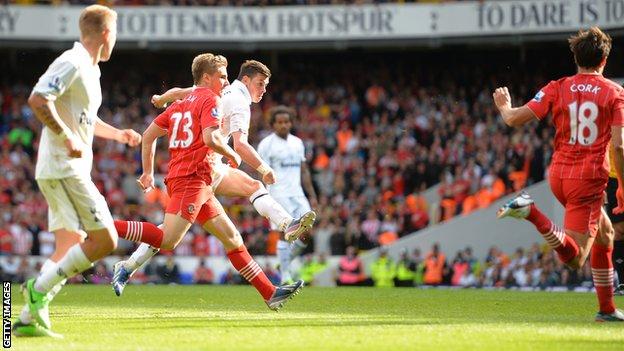 Gareth Bale produced another moment of magic to keep Tottenham on course for next season's Champions League and leave his former club Southampton still uncertain of Premier League survival.

Bale does it again

With four minutes left, the PFA Player of the Year darted infield and, from 25 yards, crashed a rasping shot beyond Southampton goalkeeper Artur Boruc.

The result was cruel on Southampton, who created many of the best chances.

But ultimately this was a game decided by one swing of Bale's left boot, a special strike that resulted in his fourth goal in his last five league appearances, as Tottenham legends Ricky Villa and Ossie Ardiles watched from the stands.

Victory means Spurs remain fifth - two points behind third-placed Arsenal - ahead of a defining week in which they play Chelsea and Stoke City. For Southampton, the defeat leaves them looking nervously behind them with a trip to Sunderland and the visit of Stoke to come.

He had his eyes on another landmark against the club where he began his career - becoming the first Spurs player to score 20 league goals in a season since Jurgen Klinnsmann in 1994-95.

But Bale was made to wait, not only by the 30-minute delay to kick-off because of a chemical spill on the M25, but by a diligent and dogged Southampton performance, as they showed further evidence of their continued development under manager Mauricio Pochettino.

Tactically smart, the visitors' work-rate was also admirable and for much of the first half Bale found he had company wherever he appeared on the field.

Southampton should have been ahead after 11 minutes, when Lambert picked out an attacking surge by Nathaniel Clyne. A lofted pass put the young full-back through on goal, only for his shot to flash inches wide of Hugo Lloris's right-hand post. It was a warning for Spurs, but Southampton were to come closer still as the half wore on.

In his final contribution of the match before a recurrence of a hamstring injury, Mousa Dembele fouled Jay Rodriguez on the edge of the penalty area. Lambert struck the resulting free-kick hard and low, thumping the post after a vital fingertip save by Lloris. Guly Do Prado gathered the loose ball and immediately hooked it back into the penalty area where Steven Davis headed straight at the Tottenham goalkeeper with the goal at his mercy.

The pattern continued after the interval as Adam Lallana skipped away from Michael Dawson, only to scuff his shot when through on goal. But it was to prove costly.

Spurs responded by introducing Emmanuel Adebayor and his neat flick put Clint Dempsey through on goal but he could only shoot over. Boruc flapped at a Tom Huddlestone corner late on but the visitors clung on.

Having been subdued and stifled for much of the afternoon, Bale claimed a late penalty as he went down under Jack Cork's clumsy challenge but referee Mark Clattenburg was on hand to wave away the Spurs appeals. the Welshman, though, would not be denied.

As the clock ticked towards the 90th minute, Bale drifted wide to the right flank and gathered a pass from Kyle Walker. He surged away from the attentions of Luke Shaw, took one look at goal and unleashed a tremendous low drive that flashed beyond Boruc and into the far corner.

"It was very important. It was difficult to break them down. In the first half, Southampton had the better chances, but we managed to hold on to 0-0 and then in the second half we improved and were much better and created a couple of chances, because Southampton did ever so well. They kept the ball well.

"But we waited, had patience and then managed to score. We have been getting late goals recently and that has been decisive for us. The more you score late on, the more you believe you can turn the games in the last minute and that acts as a motivation for the players."

"We deserved a lot more, we should have got at least a draw - a win would have been well deserved but we go home with nothing. I am disappointed about the result. We have competed very well and played very well, we have controlled the game for large periods and I am happy with the performance of my team but we are really angry because we have not got anything from this game. We are aware we need to get the maximum number of points from the last two games but if we keep performing as we did today, we will not be in any trouble."