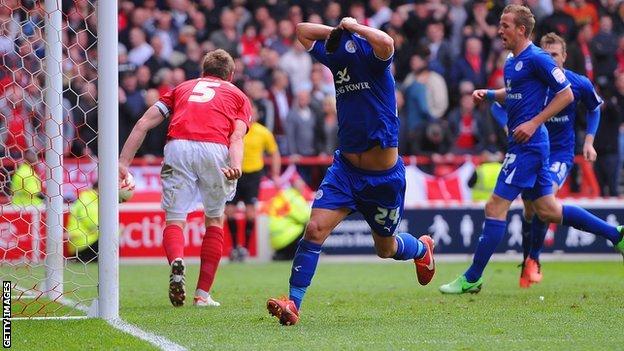 Anthony Knockaert scored an injury-time goal as Leicester City booked their spot in the Championship play-offs with an incredible win at Nottingham Forest.

The Foxes trailed to Simon Cox's early shot but a deflected Matt James strike made it 1-1, before Andy King's header put the visitors 2-1 ahead.

Both sides knew they probably had to win to stand any chance of keeping their season alive and so it proved - although only Forest seemed to grasp that early on.

The hosts piled forward from kick-off and after nearly three minutes of pressure, Cox fired them into the lead from close range after a fine Andy Reid cross caused confusion in the area.

That start should have inspired the Reds and they did initially dominate possession and territory.

But, after an abysmal opening 10 minutes by the visitors, it was all Leicester until first-half injury time - and they could easily have been leading 5-1 by then.

City's wingers Knockaert and Lloyd Dyer were behind the transformation, tormenting the Forest defence at will.

Knockaert tested Karl Darlow, Danny Collins did brilliantly to block a Dyer shot that looked destined for the far corner and both men were constantly involved.

The relentless pressure finally told when a quick corner caught Forest sleeping and James curled the ball past Darlow, with the help of a deflection.

Darlow then produced a fine low stop to keep out Dyer's strike after a swift counter-attack and Michael Keane had a goal-bound volley blocked by Collins following some nifty footwork.

David Nugent wasted a glorious headed chance but the goal was coming and it was no shock that Knockaert created it with his sensational dinked cross picking out King to head home from six yards.

Finally Forest responded and Henri Lansbury twice had efforts cleared off the line.

And the Reds started the second half as they had started and finished the first, another pinpoint delivery from Reid enabling Ward to tower above the away defence and head home.

The chances continued at both ends - Chris Wood miscued horribly and Nugent also went close for the Foxes, while Cox did likewise for Forest.

As the game entered its final quarter, results elsewhere meant a winner for either side would earn them a place in the play-offs.

And with the home side going all out for victory, Knockaert broke forward on a four-on-one counter-attack and found Wood whose pass was coolly converted by the French winger.

"The players were absolutely brilliant; we had a right good go at the end as we knew how the other results were going.

"We showed real pride in that performance. With 15 games to go, we were in an extremely difficult position in the league so would have taken having a chance going into the final day.

"We will work through the summer and hopefully bounce back again."

"I can talk about positive things but it is such a fine line. We have worked hard to get an opportunity so well done to the players.

"It's been a ridiculous league this year. During the last two or three months we have not always had the fortune we probably deserved, but we had an outside chance. We did what we had to do and things worked out elsewhere.

"It's another illustration of this crazy league.

"We showed a lot of desire and control to get back in the game maybe that will give us impetus moving forward.

"Both sets of players were dead on their feet at the end. It was an emotional day. We had to try to win, we took a few risks and it worked out OK."