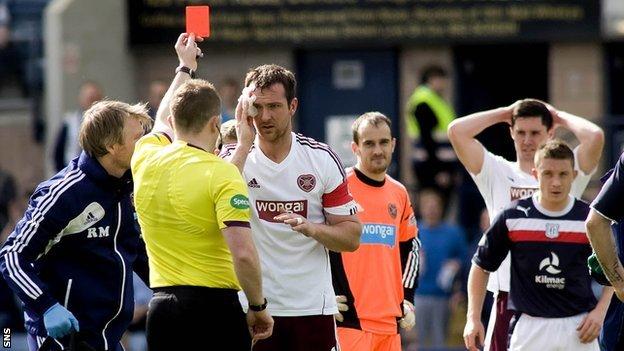 Webster was shown a second yellow in 28 minutes after clashing heads with Carl Finnigan when leaping for a high ball.

"He's looking at the ball, he's trying to go and head the ball," said Locke.

"Two players clash heads and we end up with a man down. I am extremely unhappy about it. I feel sorry for our fans because it spoiled the game."

And Locke added: "If that's going to be a booking we'd be better stopping playing football because he is looking to head the ball.

"I can see the point if there's a bit of malice in the challenge, so you can certainly say I am not happy about it."

"We looked quite dangerous going forward but with that decision so early in the game I then had to sacrifice a striker," explained Locke.

"Michael was struggling before the game with a shoulder injury so I had to take him off and go with the one striker.

"I prefer to go with two up front but it wasn't to be."

The capital club's tactics looked to be working until Ryan Conroy's deflected free-kick eight minutes from time sent the home fans in the 5,896 crowd into raptures.

The Hearts boss said: "It kind of summed up our day. I think it hit Ryan Stevenson and went into the net.

"They had a couple of half chances but we contained them for most of the game and I thought it was going to be 0-0.

"Obviously they will be delighted with that [win] and we are disappointed."