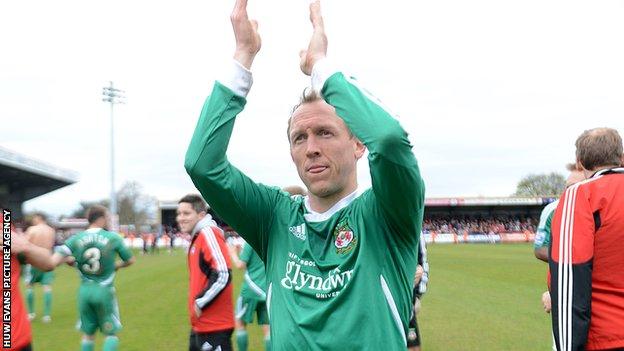 Wrexham boss Andy Morrell says his side will go into the Blue Square Bet Premier play-off final against Newport County full of confidence.

Morrell's side secured their place in next Sunday's final at Wembley with a 5-2 aggregate win over Kidderminster.

They will face Newport, who set up an all-Welsh final after beating Grimsby over two legs.

"We'll be going down there full of confidence and trying to win the game," Morrell said.

"There's no point getting to this stage and going to Wembley having a great day and losing and staying in the same division.

"Our aim at the start of the year was to get out of the league.

"We couldn't quite get to the top of the league but we've given ourselves a better chance than we have done in the previous couple of years.

"We've got another week's training and another big game ahead of us. That's where our focus will be.

"I've said before that in a one-off game I would back us against anybody in this league if we're right. It's going to be another huge, tough game."

Having won 2-1 in the first leg at the Racecourse, Wrexham completed the job at Kidderminster with a 3-1 second-leg win.

Harriers missed out on the play-off final only a week after they were edged out of the Conference Premier title by Mansfield Town.

Morrell had sympathy for opposite number Steve Burr, having lost to Luton Town in the play-off semi-finals in the previous two seasons.

"I think Kidderminster are a fantastic team and the league doesn't lie," Morrell added.

"I know exactly how they're feeling because we did it last year and it's a horrible feeling to just get pipped the last day.

"And it's a horrible feeling to raise yourself and get yourself going again.

"Maybe our experience of being in the play-offs and getting beat showed over the two legs."

Wrexham's trip to Wembley next Sunday will be their second visit to the home of English football inside two months following March's FA Trophy win.