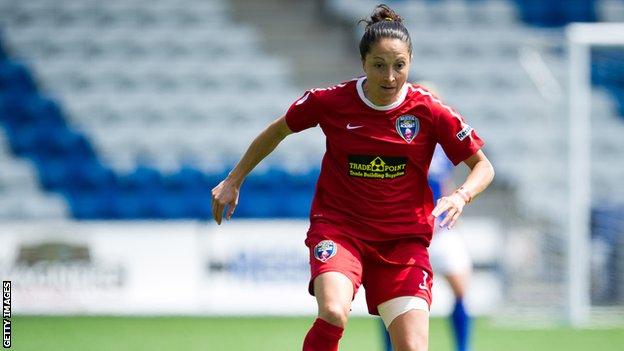 In front of a mainly Bristol-supporting crowd of 887 at Ashton Gate, Natalia opened the scoring on the hour mark with her fourth goal in three games.

And on 81 minutes Del Rio wrapped up a win that set up a meeting with Arsenal at the Keepmoat Stadium on 26 May.

Manager Mark Sampson said: "We'll go to Doncaster and give it a right good go."

Sampson, who can look forward to a second final against the Gunners in three seasons, hailed his Spanish stars.

In that last final we were a young, naive team but now we're more experienced, very well organised and highly motivated.

"She went past three or four players to set up Natalia's goal and then she scored an incredible goal herself.

"Nat's goal was scruffy but you give her a chance and she'll score for you.

"It wasn't just Laura and Nat though, that was a tremendous performance against a tough team to beat."

Lincoln manager Rick Passmoor did not agree with Sampson, feeling his side were not up to their usual standard.

"We were shrinking violets," said Passmoor.

"If you go into any game where players don't perform and don't stick to the game plan, you'll get exposed.

"Too many of my players have got to look themselves in the mirror and bounce back from this."

Lincoln were outclassed from the start and almost went behind after just two minutes.

Harding then had an eighth-minute cross-shot saved by Bradley.

And the keeper then had to keep out headers from striker Ann-Marie Heatherson and central defender Jemma Rose as Bristol kept up the pressure.

Sampson's team suffered a 35th-minute setback as Heatherson left the field on a stretcher with a suspected broken leg following a collision with Bradley.

But the Vixens continued to look the more likely side to score and, just before half-time, Bardsley had to make a goal-line stop from substitute Nikki Watts.

The England keeper denied Watts again five minutes after the break, this time with a superb diving save from the substitute's 15-yard drive.

Just 60 seconds later, however, Bristol might have gone behind when midfielder Emily Roberts rolled a low shot inches wide of the far post.

That sparked Lincoln back into action and Bradley forced keeper Siobhan Chamberlain into her first save of the match from a 55th-minute header.

But the deadlock was deservedly broken by the Vixens, Del Rio's pass setting up Natalia for a 12-yard shot that bounced into the net off the diving Bardsley's leg.

And Del Rio then ensured victory with a tremendous 18-yard shot on the turn that flew just inside the near post.

Sampson believes when the Vixens step out for the final next month, they will be far better equipped to face Arsenal than when they went down 2-0 two years ago.

He said: "In that last final we were a young, naive team but now we're more experienced, very well organised and highly motivated."