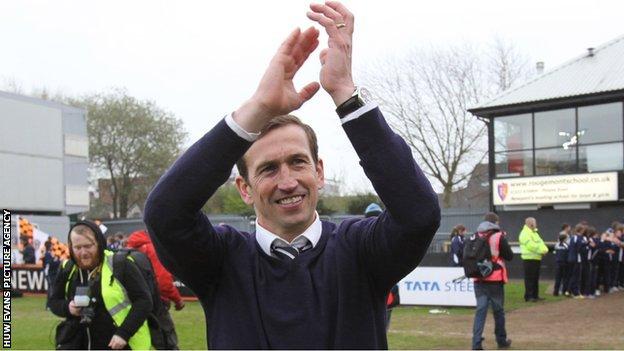 Newport will face rival Welsh side Wrexham in next Sunday's final after beating Grimsby in the semi-final.

It will be Newport's second trip to Wembley in 12 months.

"We're in touching distance now and it would be a fairytale ending to our centenary year if we can complete that last hurdle," Edinburgh said.

"This is something special. We've got to go there positive and hopefully we'll have a positive outcome."

Newport booked their place at Wembley on 5 May after Wrexham had secured their place with a 5-2 aggregate win over Kidderminster Harriers.

Edinburgh's side will be up against a team who have already found success at Wembley this season in the FA Trophy.

"It's going to be a tough encounter. They're a very experienced team and they've proved that over the duration of the season," Edinburgh added.

"They've already been to Wembley and sampled success so it's going to be a real tough game.

"[It will be] a fantastic occasion for Welsh football and hopefully we can round it off.

Christian Jolley's first-half goal was enough to secure victory against Grimsby and complete a 2-0 aggregate win over The Mariners.

And Edinburgh praised his side's achievement, coming only 12 months after they avoided relegation from the Blue Square Bet Premier.

"It's a fantastic day rounded off by a very, very professional performance," Edinburgh said.

"It's going take a little time to sink in but I'm absolutely delighted with everyone connected with the football club.

"We've come a long way in a short space of time and I'm a proud man.

"I'm immensely proud of all my staff, players and the board of directors. It's not just about me or the team, it's about everyone here."