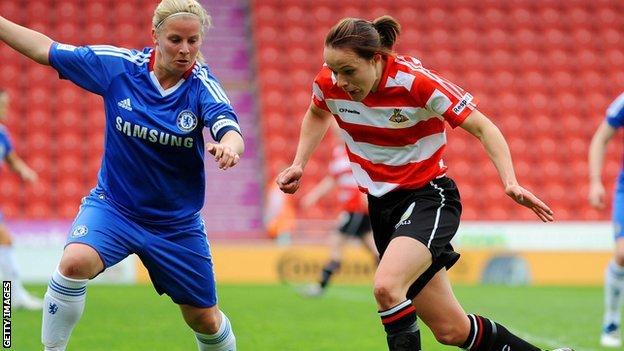 Doncaster Belles manager John Buckley has criticised the timing of the announcement that his side will play in the second division of an expanded Women's Super League (WSL) in 2014.

When the WSL expands to eight teams next year, Manchester City will take Doncaster's place in the top flight.

The Belles, who drew 1-1 with Chelsea in a Continental Cup group game on Sunday, drop to a 10-team second tier.

"It's the most farcical thing I've ever heard," said Buckley.

"I just don't understand the timing. It's demotivating for the players."

Chairman Alan Smart wrote in his programme notes for the Chelsea game: "The Belles have been relegated after only 90 minutes of football [Doncaster played Chelsea in the league last week]."

Buckley added: "Not many things knock the stuffing out of me, but this has. I've got to make sure that feeling doesn't get to the players and it didn't [on Sunday], because they put in a good performance."

The Belles had good spells of pressure throughout against a strong Chelsea team at the Keepmoat Stadium.

They went ahead when striker Jessica Sigsworth forced home a loose ball after her first effort had been blocked.

Sigsworth then went close to doubling the lead when she hit the crossbar from an angle.

But just before half-time, Chelsea's close-season signing Olina Vidarsdottir headed the visitors level with her first goal for the club.

Sigsworth and midfielder Millie Bright were both denied by goalkeeper Shannon Lynn as Donny looked for a winner after the break but the game finished 1-1.