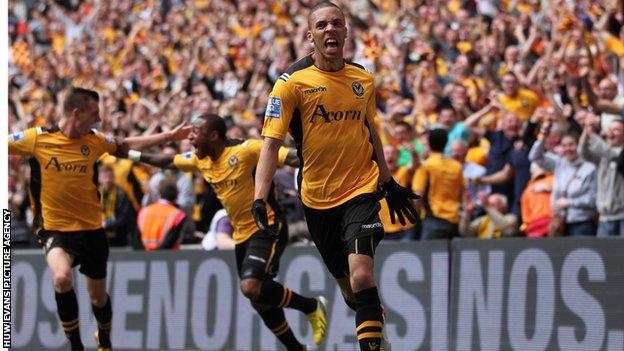 Newport are back in the Football League after 25 years following a tense 2-0 victory over Wrexham in the Blue Square Bet Premier play-off final at Wembley.

County, who reformed in 1989 after the original club folded because of financial difficulties, join Mansfield in returning to the fourth tier.

Christian Jolley made the Dragons pay four minutes from time, before Aaron O'Connor added a second in injury time.

This was only Newport's second season as a full-time outfit and only their third season in the Conference.

They had slowly but surely climbed the English pyramid since reforming in 1989 after the original club folded amid financial ruin a year after relegation from the Football League.

Wrexham will consider themselves unlucky to lose this all-Welsh encounter, their third successive failure in the play-offs, but only have themselves to blame after missing several opportunities in front of a crowd of 16,346.

Having negotiated the semi-finals with few alarms, both managers stuck with the old adage of not changing a winning side.

It was a more straightforward choice for Wrexham player-manager Andy Morrell, whose squad had been disrupted by a string of late-season injuries, most notably for leading goalscorer Danny Wright.

Justin Edinburgh, though, resisted the temptation to start with Newport's top scorer O'Connor.

This was billed as a battle between the league's best midfield against the most potent strike force, and that is exactly what transpired.

Three is the magic number

The Dragons targeted the space behind Newport's wing-backs, and it brought the first real opening when 36-year-old Brett Ormerod, a Championship play-off final scorer with Blackpool, cut inside from the right but dragged his effort wide of the near post.

He then fired over from Johnny Hunt's cross before again threatening Newport's goal with a 25-yard fizzer.

Down at the other end, Jolley, who came into the game with five goals in six games, was a spectator as Wrexham's first-half dominance gathered momentum.

But the striker showed his class moments before the break when his left-footed curler narrowly missed the top corner.

Those opportunities woke the Newport players from their slumber, too, as they returned after the interval with more vigour and belief, helping to raise the tempo of a game that had begun to amble along.

Wrexham responded to the challenge and Ormerod should have broken the deadlock, blasting wildly over from six yards after Morrell's initial effort had been saved.

Hunt's drive was then palmed away at full stretch by the alert Newport keeper Lenny Pidgeley.

Edinburgh turned to O'Connor in search of a spark, replacing the ineffectual Danny Crow, while the tiring Morrell replaced himself with pacy winger Adrian Cieslewicz.

Marin Riley hardly put a foot wrong or lost a challenge and the centre-back produced the block of the match to deny Jolley.

But the striker was not to be denied as he struck four minutes from time. David Artell could only head a long ball towards his own goal and Jolley latched on to it in a flash before coolly lifting the ball over the on-rushing Chris Maxwell.

Newport then stood up to Wrexham's late aerial bombardment into the box in stoppage time.

But a counter-attack left the defence exposed once more and O'Connor, on the second attempt, fired into the roof of the net to put the result beyond doubt in front of the ecstatic County fans.