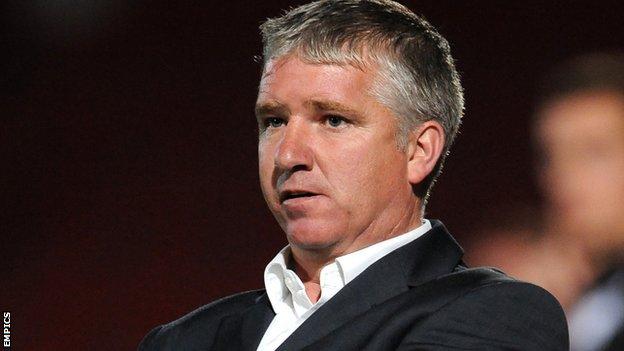 The 46-year-old was after Paul Buckle left the club to take over at Bristol Rovers.

However, the former Leyton Orient and Cambridge boss had been with

Despite that, a brief club statement said the decision to relieve Ling of his job was based solely on results.

It said: "The decision is based purely on footballing grounds, after falling from play-off contenders last season to just escaping relegation this time around, and early exits in all three cup competitions."

"Everyone at Plainmoor would like to thank Martin for his work over the last two years and we wish him every success in the future."

But Ling told BBC South West Sport that he had not been expecting to have his contract terminated.

"I was amazed to receive a phone call from Thea Bristow [the Torquay chairwoman] at 7.30 on Sunday night to say that my contract with the club was being terminated after all the assurances during my illness and full recovery that I would be returning as manager of Torquay," he said.

Ling won 24 of his 52 games in charge in his first season in charge, a win percentage of 46%, good enough to take the Gulls into the play-offs before a

This term, results were indifferent, with the team winning eight, losing 10 - including an FA Cup first-round defeat by non-league Harrogate Town - and drawing 11 games prior to his break from the job.

The news of Martin Ling's departure has come as something of a surprise.

I understand he was expecting to discuss the future of the club's playing staff with the board this week.

With Alan Knill having been at the helm for three months, the smart money would appear be on the club asking him to take over on a permanent basis.

Ling's last game in charge was the 1-1 draw with local rivals Exeter City on 15 January.

His assistant, Shaun Taylor took charge for the next six games, winning the first but losing the next five before the board gave th job to former Scunthorpe and Bury manager Knill.

He declined to comment on the news of Ling's departure when contacted by the BBC on Monday, but Torquay skipper Lee Mansell was taken aback, having expected to be working again with Ling next season.

"The club has obviously seen fit for some reason to part the ways with him, and I'm a little bit devastated, to be honest with you.

"Working for him was brilliant, we got on really well.

"For me he's up there with one of the best man-managers I've had during my career, and for me he's been absolutely different class."