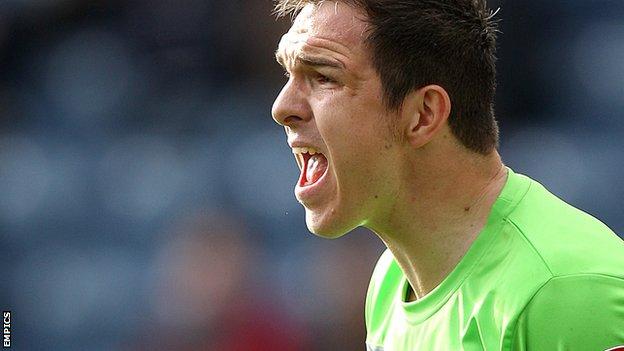 German goalkeeper Thorsten Stuckmann is hopeful and confident that he will be offered a new contract by Preston.

Stuckmann was North End's player of the season in 2011-12 but has started just 22 of their 46 league games this term.

"I played great here last season and this season has been a bit up and down," he told BBC Radio Lancashire.

"I haven't played as many games as I would have wanted to but I've enjoyed my time at the club and hopefully we can get it [a new deal] sorted."

He continued: "The manager [Simon Grayson] has said he wants to contact me and my agent soon. We'll talk about the situation and see where we go from there.

"Everybody knows I really enjoy playing for Preston, but it's not in my hands - it's the club's decision."

It helps the team when they know that, whoever plays, we'll have a good keeper in goal

Wright left without playing a first-team game for the Lilywhites, and Stuckmann has since had to battle with and for a first-team place.

The 32-year-old has started just twice since Grayson replaced Westley as Preston boss in February, but he is full of praise for Rudd - the man who has kept him out of the starting line-up in recent weeks.

Stuckmann added: "Declan has been brilliant since he's been here. He's got a bright future.

"I enjoy working with Declan and it's good to see such a good talent getting better and better. It helps the team when they know that, whoever plays, we'll have a good keeper in goal."