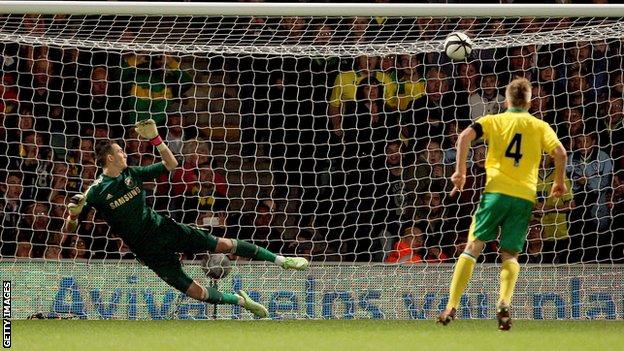 Cameron McGeehan's injury-time penalty delighted the majority of a 21,000-strong crowd as Norwich City earned a 1-0 victory over Chelsea in the first leg of their FA Youth Cup final.

Islam Feruz snatched at two chances for the Blues before Nathan Ake failed to force the ball into the Norwich net.

The Canaries improved in the second half and saw Carlton Morris slice over.

And just when it looked like stalemate was inevitable, McGeehan held his nerve after Joshua Murphy was fouled.

"I was as pleased for the fans as I was for the players, because they've turned out in phenomenal numbers," said Norwich City Under-18s coach Neil Adams.

"To nearly fill the ground is incredible. The late goal gives us a good opportunity at Stamford Bridge. It will be a tough task for us, we know how good Chelsea are, they showed that tonight.

"We have a big job to do in the second leg. If we apply ourselves with the determination we had tonight we'll give it a good go."

London-born McGeehan could well have been lining up for the visitors but was released by the Blues two years ago.

And the Canaries will cherish his goal dearly at Stamford Bridge in two weeks' time when the Norfolk side will need every bit of the same commitment and endeavour if they are to prevent the Blues from retaining the title they won last year.

Norwich's run to the final has captured the enthusiasm of the Norfolk public, with Canaries fans hoping their side can replicate their only success in this competition 30 years ago.

Chelsea's track record has been somewhat more prolific in recent years, having won the FA Youth Cup twice in the last three seasons, and for large parts of the game showed why the Blues academy has been so successful.

Blessed with pace throughout the side, Chelsea twice saw Scotland prospect Feruz fail to hit the target from close range and Ake, who made his only Premier League appearance on this same ground on Boxing Day, saw his point-blank effort blocked by keeper William Britt and then his follow-up scrambled off the line by McGeehan.

The Canaries increased their threat in the second half, with highly-rated twins Jacob and Joshua Murphy finding joy down each wing and Carlton Morris sending an inviting opening over the bar.

And it was Joshua who won the penalty in added time, going down under Alex Davey's challenge to allow McGeehan to power home from the spot in a memorable moment for the 18-year-old.