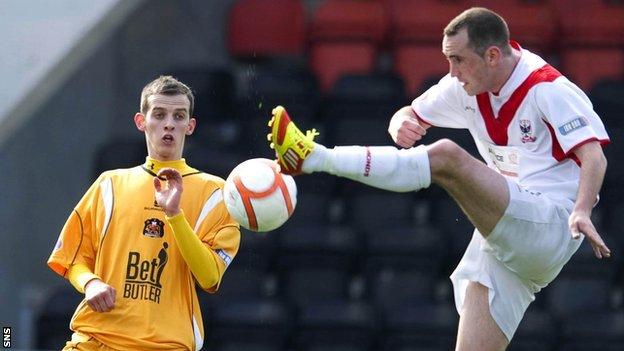 The introduction of a promotion/relegation play-off between the country's top two divisions appears to be the most likely change in Scotland's league make-up.

After a protracted period of discussion, proposals to reconfigure the leagues, merge the Scottish Premier League and Scottish Football League and revise financial redistribution have been ultimately rejected.

However, , with four different models having been discussed.

Play-offs are well established in three of Scotland's senior leagues. At the end of each season, the second-bottom side in Division One and the teams finishing second, third and fourth in Division Two enter a two-legged semi-final stage with the winners progressing to a two-legged final. The eventual winner takes up a place in the First Division.

The same system exists between Divisions Two and Three.

Last season, Dumbarton earned promotion to Division One via the play-offs (pictured above), while Albion Rovers survived relegation from the Second Division through the end-of-season matches.

Prior to the breakaway of clubs from the SFL to form the SPL in 1998, there were, for a brief period, play-offs between Scotland's top two divisions.

The traditional 'two-up, two-down' system that existed between the First Division and Scottish Premier Division was replaced by one automatic promotion and relegation exchange and a two-legged play-off between the second-bottom side in the top flight and the second-top team in Division One.

Through this system, Dundee United earned promotion by beating Partick Thistle on aggregate in 1996 and Hibernian survived relegation the following year by overcoming Airdrieonians.

Play-offs in England's senior leagues solely concern promotion, with all relegation from the Premier League, Championship and League One automatic.

Teams finishing third to sixth in the Championship, League One and League Two enter a two-legged semi-final stage before a one-off final, traditionally played at Wembley.

This season's play-offs will begin on 9 May.

Promotion play-offs that follow the same format as England's Football League have been used in Italy and Spain.

In Belgium, the bottom two teams in the Pro League play-off over four matches to decide which team will be automatically relegated and who will progress to compete for a place in the top flight with three teams from the Second Division (those finishing second, third and fourth).

The four teams meet in a league format, with the winner taking up a spot in the Pro League. In 2011, after Mons and Waasland-Beveren finished on the same points, a one-off tie between the two sides was organised, with Mons winning and gaining a top-flight place.

Dutch football also features a promotion/relegation system between the Eredivisie and Eerste Divisie.

These play-offs are played over three two-legged rounds with second- and third-bottom sides from the top flight joining at the second-round stage. Ultimately, two teams win places in the Eredivisie.