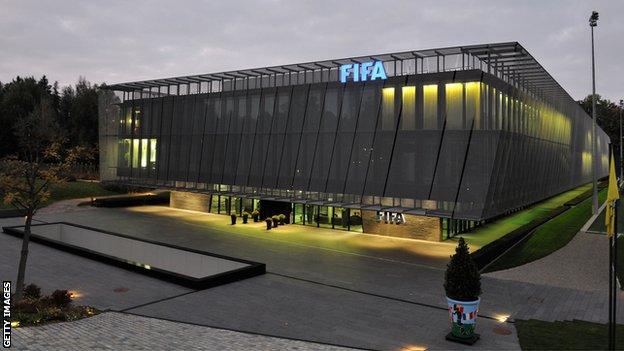 The International Sport and Leisure (ISL) corruption scandal has been smouldering away under Fifa for such a long time, it is hardly a surprise that Tuesday's ethics committee report attempts to finally extinguish the fire.

The chairman of the least broadcast-friendly new body in football, the Fifa Ethics Committee Adjudicatory Chamber, Hans-Joachim Eckert, concludes definitively in his eight-page report that "the ISL case is now closed".

That might be how he and the ethics committee see things but there are still plenty of questions left hanging in the air.

At the very best this is yet another example of window dressing. The latest attempt by Fifa to look accountable and transparent but which leaves us wanting to know so much more

To recap briefly, ISL was Fifa's media and marketing partner at the end of the 1990s, responsible for handling TV rights negotiations for the World Cup. The company went bust in 2001 owing millions of pounds to creditors.

Amid the financial wreckage, investigators found evidence that commissions - known to you and me as bribes - had been paid to senior Fifa officials in return for their help in securing lucrative TV deals, most visibly in South American territories.

Two Brazilians - former Fifa president Joao Havelange and the former head of the Brazilian football federation Ricardo Teixeira - both stood down from their senior positions in football after court documents revealed they had received bribes from ISL.

Both escaped criminal prosecution because accepting these commissions was not a crime under Swiss law at the time.

Fifa did repay more than £1.6m to the creditors of ISL in 2004, although it has never been stated directly that this money was connected to Havelange and Teixeira.

Havelange, already discredited, has finally relinquished his remaining Fifa post, that of honorary president, after Eckert's report concluded his conduct was "morally and ethically reproachable".

One new development is the resignation of Nicolas Leoz, the president of South American football confederation Conmebol. The 84-year-old said last week he was standing down on "health and personal grounds".

It is clear from Tuesday's report that it was his connection to the ISL scandal which forced his hand.

Eckert concludes: "As to Dr Leoz he claimed that all the money he received from ISL was donated by him to a school project, but only by 2008 - eight years after he received it."

As with another of Fifa's old hands Jack Warner, resignation has prevented Leoz and his South American colleagues from the indignity of being forced out. It feels unsatisfactory but the truth is Fifa's ethics committee never had the power to do anything about the ISL case.

Ever since Andrew Jennings' brilliant digging on this subject for Panorama exposed the uncomfortable connections between the collapsed ISL and Fifa's executive committee members, Fifa has been struggling to make it go away.

The latest iteration of the ethics committee - a two-chamber structure split into an investigatory arm headed by the New York lawyer Michael Garcia and the decisions panel fronted by Eckert - has failed again to delve beyond what we already knew because ultimately Fifa's own ethics committee can only enforce rules in its ethics code.

This was only established by Fifa in 2004, long after the bribes had been pocketed and ISL had collapsed.

So, at the very best this is yet another example of window dressing. The latest attempt by Fifa to look accountable and transparent but which leaves us wanting to know so much more.

Are we really to believe that the bribes stopped with just three men at the top of Fifa? Shouldn't there now be a proper independent inquiry into whether other officials appeared on the ISL commissions list?

As for President Sepp Blatter's own conduct, he wasted no time in trumpeting the fact that Eckert had found him not guilty of any ethics code breach. But he has not escaped without criticism.

On the long-running question of why Blatter did not blow the whistle back in 1997, when a payment of 1.5m Swiss francs (£1m) for Havelange came across his desk, Eckert states: "The conduct of President Blatter may have been clumsy because there could be an internal need for clarification, but this does not lead to any criminal or ethical misconduct." Blatter simply and, we are to believe, without any real hint of curiosity, sent the money back to ISL.

Eckert goes on: "It must be questioned….whether President Blatter knew or should have known over the years before the bankruptcy of ISL that ISL had made payments (bribes) to other Fifa officials." If not corrupt, he was guilty of incompetence.

But, ultimately: "There are no indications whatsoever that President Blatter was responsible for a cash flow to Havelange, Teixeira or Leoz, or that he himself received any payments from the ISL Group, even in the form of hidden kickback payments."

And so Blatter is cleared again, freed to continue his promised process of 'reform' which faces a critical test in a few weeks in Mauritius - the luxuriant location for this year's Fifa congress.

There among the palm trees and the sandy white beaches, Blatter will attempt to drive through a series of structural changes aimed at finally silencing the doubters who say that until he goes, Fifa cannot move on from its dirty past.

Tuesday's report will have only strengthened his resolve to carry on fighting.