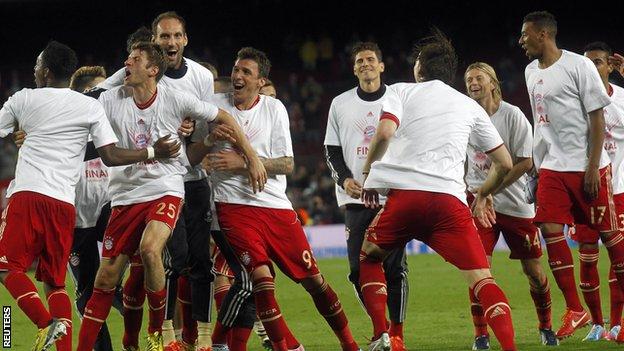 Bayern Munich pulled off a stunning 3-0 victory over Barcelona at the Nou Camp to complete a record Champions League semi-final aggregate win.

Arjen Robben opened the scoring shortly after half-time when he cut in from the right and found the top corner.

Gerard Pique turned Franck Ribery's cross into his own net before Thomas Mueller headed in at the far post to complete the 7-0 aggregate rout.

Barcelona's previous highest defeats in European competition were all by a four-goal margin. They lost 4-0 against AC Milan in the 1994 European Cup final, by a four-goal aggregate margin against Valencia in the Uefa Cup in 1962 and the same against Real Madrid in the European Cup two years earlier.

Bayern now meet fellow German side Borussia Dortmund at Wembley on 25 May.

Jupp Heynckes' side were beaten by Chelsea in last season's Champions League final but, on the evidence of their two performances against the Catalan giants, it will take an almighty effort from Dortmund to prevent them winning their fifth European Cup.

Barcelona, who left injured talismanic playmaker Lionel Messi on the bench, were once again outplayed by the brilliant Bavarians.

And if Bayern's first-leg demolition shook Europe, their second-leg dominance should ensure even bigger reverberations - such was the magnitude of their dominance in the Nou Camp.

From Mario Mandzukic's selfless work as the lone striker, to the slick pass-and-move skills of those behind him, the visitors outplayed Tito Vilanova's side.

Their ruthlessly efficient counter-attacks always carried a goal threat, to the extent that Barcelona were reluctant to commit enough men forward to seriously test the stout Bayern defence.

Perhaps lifted by the absence of Messi, who is still struggling with a hamstring injury, Bayern started brightly and Pique had to be alert to deny both Robben and Philipp Lahm.

Despite the onus being on them to score, Barca were not able to test Manuel Neuer until the 23rd minute, the Germany goalkeeper tipping Pedro's 25-yard shot over the bar.

Bayern equalled the biggest away win in a CL semi-final, set by themselves in April 2010 (3-0 at Olympique Lyon) and by Ajax in April 1996 (3-0 at Panathinaikos)

Bayern have kept a clean sheet in four consecutive CL knockout matches, a club record. The last club to keep at least four clean sheets was Manchester United in 2008 with five.

Content to let the Spanish side pass the ball in their own half, Munich sat back and pounced on loose passes to mount dangerous counter-attacks on the beleaguered Barca backline.

Xavi fired over for the hosts while, at the other end, Robben had a shot charged down.

Something had to give, and it was Barcelona's slim chances when, three minutes into the second half, David Alaba switched play to Robben, who expertly cut inside and curled a left-footed shot into the top corner.

Not content with their commanding advantage, Bayern continued to counter and Pique summed up Barcelona's evening when he failed to deal with Ribery's cross from the left and shinned the ball past his own keeper Victor Valdes.

The record aggregate victory was completed when Mueller rose highest at the far post to head home another super Ribery cross.

Bayern's victory eclipses Manchester United's 6-1 aggregate rout of Schalke in 2011, and, while Sir Alex Ferguson's side lost to Barcelona in the final that year, it is difficult to see a similar fate befalling this mighty Munich side.