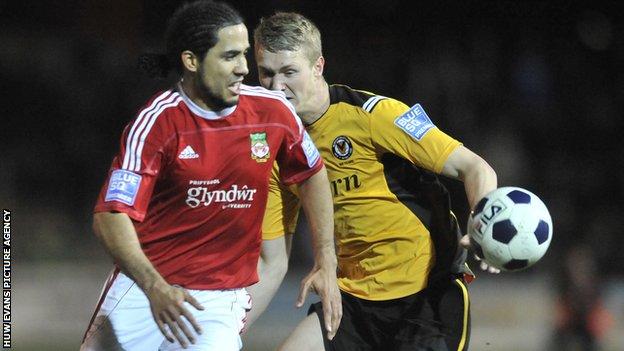 Wales manager Chris Coleman says Newport and Wrexham will both be in the Football League within two years regardless of who wins Sunday's Blue Square Bet Premier promotion final.

The Welsh clubs meet at Wembley with a place in League Two at stake.

Coleman says he will have split loyalties but feels the losing team should not be too downhearted.

"There's so much riding in it. Unfortunately there's going to have to be a winner and a loser," Coleman said.

"I'm quite convinced whichever one doesn't do it this year, whether it's next year or the year after, will eventually be back in the [Football] League.

"One of them is going to miss out but at least we know one of them will be getting back to where we've always wanted them to be.

"Whoever loses, they'll have to get over that doing what they've been doing because they're improving all the time."

Newport are aiming to return the Football League 25 years after the club were relegated and subsequently liquidated.

The club have slowly progressed up several tiers of the English non-league pyramid and are now one win away from completing their journey back.

"It was very sad when it all fell to pieces but a lot of people have put a lot of hard work in to get Newport to where they are," Coleman added.

"I thought eventually they would get back in [the Football League] because there's always been a big interest in Newport County.

"Let's hope they go from strength to strength."

Wrexham were relegated from the Football League in 2008 and have suffered financial difficulties and ownership turmoil during their time in the Conference Premier.

The club is now owned by the Supporters Trust and Coleman paid tribute to the efforts of fans in saving Wrexham.

"You've got to give the fans a huge pat on the back," Coleman told BBC Wales Sport.

"Obviously fans love their own clubs but when you end up running it yourself it's not always what you expect.

"Both clubs, Newport and Wrexham, have been chipping away at it and improving every season and not just on the pitch.

"Off the pitch is important for clubs like Newport and Wrexham. Financially they've had to try and get that right because money has been tight.

"They've been improving in all aspects of their football clubs."