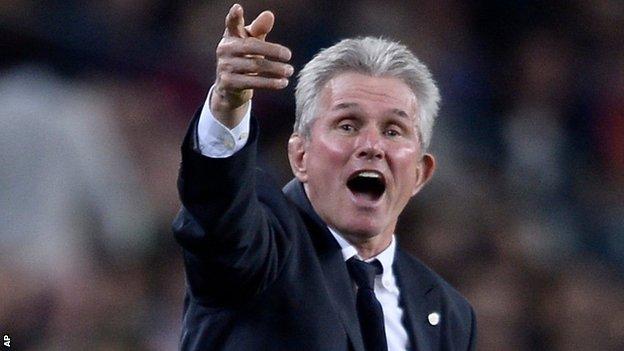 Bayern Munich coach Jupp Heynckes says his side will be spurred on by last season's Champions League final defeat by Chelsea when they face Borussia Dortmund at Wembley this year.

Heynckes said: "You can learn a lot more from a defeat than a victory.

"We have the experience of last year to fuel us in this final and I obviously hope that we can be successful."

Bayern equalled the biggest away win in a Champions League semi-final, set by themselves in April 2010 (3-0 at Lyon) and by Ajax in April 1996 (3-0 at Panathinaikos)

Bayern have kept a clean sheet in four consecutive CL knockout matches, a club record. The last club to keep at least four clean sheets was Manchester United in 2008 with five.

Bayern lost last season's final on their own ground as The German side also lost out in the final in 2010 when Jose Mourinho guided Inter to a 2-0 win in Madrid.

But coach Heynckes, who will be replaced by former Barcelona boss Pep Guardiola in the summer, says his side have been preparing to win this season's trophy since Didier Drogba's spot-kick gave Chelsea victory last May.

"It is not a secret that I am someone that has lived everything in football as a player and a coach and I was very disappointed after the final last season," he said.

"We are a united group on and off the pitch. We have won the league, we are in the cup final and we have the logical target of the Champions League because of the very bad luck we had in last year's final."

The four-time winners last lifted the European Cup in 2001 - a penalty shoot-out victory against Valencia - and, despite being 20 points clear of Dortmund in the Bundesliga table ahead of their meeting this weekend, winger Arjen Robben does not expect an easy final on 25 May.

"It's time to win it now," the former Chelsea player said. "It's going to be a big game which will be decided by the small details. Dortmund have proven over the last two or three years that they are a very good side."

Heynckes laughed off speculation that he may return to take charge of former side Real Madrid, with whom he won the Champions League in 1998, when he leaves Bayern in the summer.

He said: "On 9 May, I will turn 68 years of age and 50 of those have been in football as a player or a manager, so there comes a time when you have to say it is enough.

"My team this year has played at a world-class level and that is why there is speculation about what this coach will do at the end of the season. But speculation is all it is."