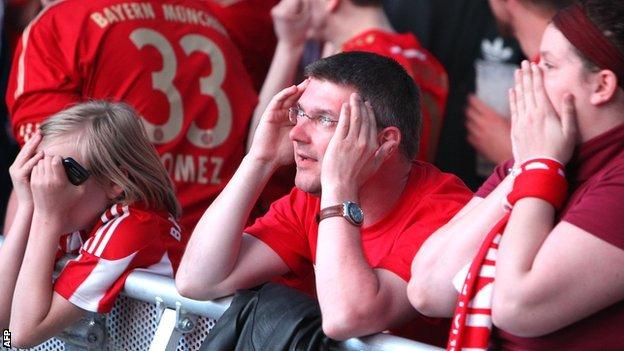 There is undoubtedly lots English football can learn from Germany.

In a week when two German sides were emphatically confirmed as this season's Champions League finalists, it's hard to argue anything else.

But while the tight financial controls, cheaper ticket prices and greater fan involvement show the Premier League and the FA that there is another way to run the national game, it would be wrong to think of Germany as some kind of fussball utopia.

During my recent trip to Dortmund for the BBC News Editors film, there were plenty of people keen to point out that the Bundesliga is not without its problems. It's a view well expressed in an article by Uli Hesse in the Guardian on Thursday.

The biggest concern is crowd trouble. While recent events at Wembley and on the streets of Newcastle were a reminder that the scourge of hooliganism hasn't gone away in the UK, Germany has been wrestling with this in a much more serious way.

A number of teams have been punished for failing to control their fans and last October police arrested 180 people following violent clashes between Dortmund and Schalke supporters at the Ruhr derby.

A recent government report in Germany concluded that hooliganism had reached a 12-year high. In an effort to address the problem the 36 professional clubs voted for new measures in December to increase security in and around grounds.

But fans are opposed to anything that might impact on the unique atmosphere of matches and finding a compromise has been difficult. What makes the German football experience so special is also the thing that threatens it most.

Then there is the question of German football's highly regarded financial controls. Debt is banned and the 50%-plus-one rule is supposed to prevent any one group or investor from controlling Bundesliga clubs.

This is welcomed by most fans in England but there is a loophole. Both Wolfsburg and Bayer Leverkusen are controlled by one investor (in Bayer's case the pharmaceutical giant of the same name and in Wolfsburg's Volkswagen) because their involvement goes back more than 20 years.

A third club Hannover 96 will soon join them, as their big backer Martin Kind is about to qualify under the 20-year rule, where a backer can buy the majority of shares they have been supporting a club for more than 20 years. Kind has been pushing to scrap 50%-plus-one but so far the vast majority of clubs are opposed to changing it.

Outside of the Bundesliga, the case of RB Leipzig, bought by the energy drink manufacturer Red Bull three years ago as part of a long-term plan to bring top-flight football to the East German city, suggests the financial pressure to bow to the market will only grow as the years go by. 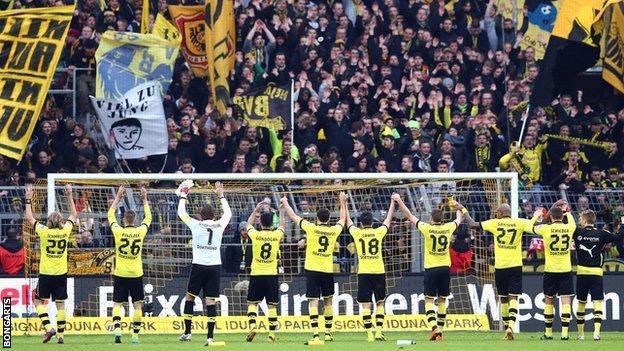 One of the reasons such owners want to invest more and have a bigger say in their teams is because the Bundesliga is still beset with the financial inequalities which are inherent in the Premier League.

As Hesse pointed out today Bayern Munich's FC Hollywood status can still attract the best players because they can afford much bigger salaries.

Hence Mario Gotze's £31m move to Bayern from their fellow Champions League finalists Dortmund in the summer. In fact the Bundesliga ranks its teams in three groupings determined by financial muscle.

As for the Bundesliga's dominance in Europe this season, there are clearly those in Germany who fear it will not last, that it will be in Hesse's words a "Momentaufnahme". That may turn out to be the case at club level - English football's superiority turned out to be temporary after all - but the upward trajectory of the Germany national team suggests it's less of a worry internationally.

All of this is not to say we shouldn't celebrate what Bayern and Dortmund have achieved and look for lessons for the English game. It's just that it would be wrong to think our old rivals are getting everything right.