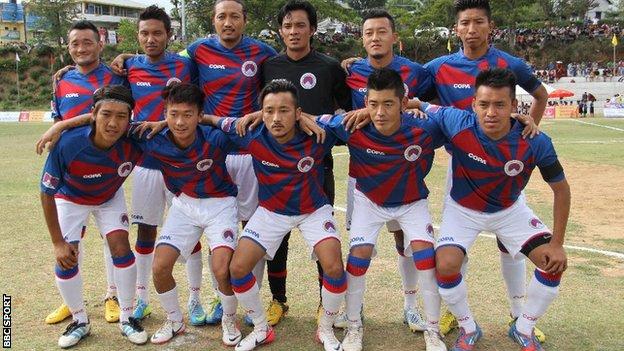 Living in exile and playing for a team unrecognised by Fifa and opposed by the Chinese, means life isn't always easy for Tibet's footballers.

Even organising matches is difficult. Visas are hard to come by and world football's governing body rules mean Tibet can only play other unrecognised teams.

After five years without a game, the Tibetans - whose national team are nicknamed the Forbiddens - finally took to the field again when they competed in the 25th All India Shaheed Dal Bahadur Durgamal Mal Gold Cup, with teams from across India, Nepal and Bhutan.

The tournament took place in Dharamsala, Northern India, the current home of Tibet's spiritual leader the Dalai Lama and the Tibetan Government in exile. Fearing for his life, the 77-year-old was forced to flee Tibet in 1959 after years of violent conflict between Tibetan rebels and the Chinese army.

The Tibetan National Football Association was only set up in 2001. In that same year the team played its first match, a 4-1 loss to Greenland in Copenhagen.

But as Tibet's coach Kalsang Dhondup told the BBC's World Football programme, football is something the estimated 150,000 exiles feel very passionate about.

"Football was introduced by the British into Tibet in, I think, 1904," said Kalsang. "Since then the Tibetans love football and physically the Tibetans are very much suited to football. Football is the most popular game in Tibet."

Ironically the British were in Tibet on a military expedition fearing Russia's growing influence in the region.

But now Tibet, in the north-east of the Himalayas, faces a very different problem. The football team encounters strong opposition from the Chinese who claim sovereignty over Tibet and dismiss any show of independence. But coach Kalsang remains defiant. 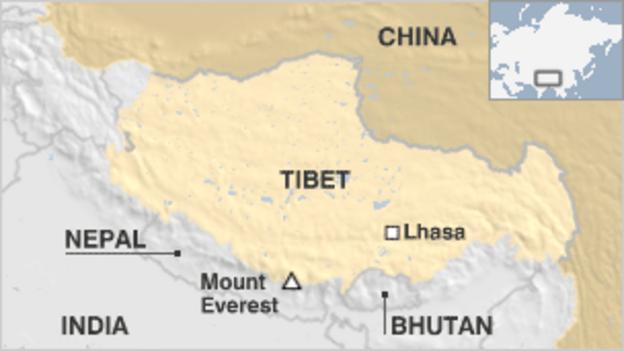 During the tournament in Dharamsala, the team wore black armbands to show their solidarity with Tibetans inside Tibet.

Since 2009, 117 Tibetans have set themselves on fire to protest against the Chinese Government.

Tenzin plays for the Tibetans. He didn't want to give his family name because of fears for the safety of his relatives still in Tibet.

He admits that it's difficult to represent a country which is no longer recognised.

"I escaped from Tibet in 1996 and I feel very, very special and a lucky one to be part of the national team and it's really a proud moment for me," he said.

"Sometimes it's really challenging and difficult in such an environment where Fifa is not recognising our Tibetan football. At the same time I feel proud to represent Tibet and also feel responsible for the Tibetan cause."

And, as Kalsang explains, the team have a big fan in the shape of the Dalai Lama.

"I think His Holiness has support for Tibetans in all issues," he stated. "Even sport also. We went to Italy in 1999 and after we came from Italy we had an audience with His Holiness.

"At the end of that, when he had a ball in his hands, he said: 'I like football. When I was small there was no place for me to play football. If I play, the ball will fall from Potala (Palace) and then the ball will be lost.' He has a great support for us."

On the pitch things didn't go well for the Tibetans. They lost 3-0 against the Indian state team Himachal Pradesh.

But given the fact that past performances have included a 10-0 loss to Northern Cyprus and a 13-2 defeat at the hands of a Padania team from Northern Italy, perhaps that's not such a bad result.

And for players, such as midfielder Sonam Topgyal, the chance to wear the Tibetan football jersey was a truly special moment.

"Right now I'm doing one job in a juice factory," Sonam explains. "Since 2000 when I was in school I hear about the national team. Then I make a dream that one day I will represent the Tibet team.

"At that moment when we first stand on the field singing the national anthem, we really feel proud that we have a country and we are representing our country."

And for players such as Sonam, their ambitions know no bounds.

"One day our Tibet will be free, so I wish I can represent Tibet in international competitions like the Olympics or World Cup," he concluded.