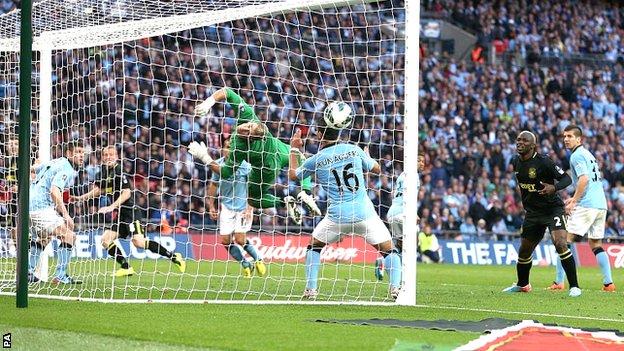 Roberto Martinez's side produced a performance full of attacking intent and verve to fully deserve this historic win against firm pre-match favourites City, who had Pablo Zabaleta sent off six minutes from time.

Substitute Watson, who has missed much of the season after breaking his leg in November, sent Wigan's fans into ecstasy with a near-post header from Shaun Maloney's corner at the very moment the board went up to signal three minutes of stoppage time.

"If this FA Cup final was to be the beginning of the end for Roberto Martinez and Roberto Mancini, one was leaving on a magic carpet while the other was being smuggled out of the back door"

The goal was just reward for Wigan, whose drive and intensity was in sharp contrast to the desperately lacklustre display served up by City as last season's Premier League champions end this campaign empty-handed.

It completed a miserable day for manager Roberto Mancini, which began with reports that was about to be sacked and replaced by Malaga coach Manuel Pellegrini and ended with a defeat that left City's hierarchy looking on stone-faced from the Royal Box as Wigan celebrated.

Opposite number Martinez is also at the centre of speculation about his future as he has been linked with the forthcoming managerial vacancy at Everton - and his stock will have risen markedly now he has the FA Cup against his name.

And when this final is remembered, the performance of Wigan's Callum McManaman will be recalled alongside Watson's goal after a magnificent, and close to unplayable, display of wing play which gave City defender Gael Clichy a harrowing afternoon.

It was also a moment of sheer joy for Wigan chairman Dave Whelan, who broke his leg playing for Blackburn Rovers in the 1960 FA Cup final against Wolves at Wembley. He led the team out, then watched in delight as they lifted the treasured trophy.

Once the delight has died down, Wigan must focus on what Martinez insists has always been their main priority, ensuring they stay in the Premier League as they remain in the relegation zone with only two game remaining.

Mancini made one surprise selection decision as he replaced Romanian Costel Pantilimon - City's FA Cup goalkeeper throughout their run to Wembley - with first choice Joe Hart.

It was his opposite number Joel Robles who was into the action first as he saved from Yaya Toure after Carlos Tevez's poor free-kick had been charged down.

After this uncertain start, however, Wigan visibly grew in confidence and produced a first-half display of real composure and enterprise, exemplified by the excellence of McManaman and James McArthur.

McManaman had the opportunity to put Wigan ahead after only nine minutes but chose to cut inside when a first-time shot might have been the better option, curling a left-foot effort wide.

For all Wigan's trademark comfort in possession, it was their keeper Robles who was busier in that first half. He used an outstretched leg to save Wigan as Tevez looked certain to score after he was set up by Samir Nasri and David Silva eight yards out.

McManaman was a threat once more as he evaded Hart and weaved his way around the area, only to see his goalbound effort blocked by Zabaleta.

City's threat was sporadic but Robles was still being made to work and he saved from Gareth Barry and Nasri as an entertaining first 45 minutes came to a close.

The favourites had more of a spring in their step in the moments after half-time and it took a crucial touch from Latics defender Emmerson Boyce to divert Sergio Aguero's glancing effort at the near post following good work by Tevez.

Mancini was visibly unhappy with some of City's work and he wasted no time in making his first change, sending on James Milner for Nasri after 53 minutes.

"I'm close to the Man City camp and I was shocked when I heard the rumours about Roberto Mancini's future.

"I think there's now more pressure on Mancini because he's lost the trophy today, but I believe he will be there next season. That's what I've heard. But today has put a huge dent in him going forward.

"I think he deserves another year, one more crack, and being able to spend more money on better players. The thing that's cost Mancini is the players bought in the summer. Poor players."

The noise levels among the Wigan support rose every time the exciting McManaman got on the ball and it took a superb block from City captain Vincent Kompany to end another jinking run into the area.

Mancini made another, somewhat surprising, change with 21 minutes left when Jack Rodwell came on for Tevez and swiftly had a header that was clutched by Robles.

Wigan, to their immense credit, were refusing to take a backward step and gave City another anxious moment when Maloney's angled free-kick glanced off the bar.

City, who had struggled for rhythm all afternoon, were reduced to 10 men with six minutes remaining when Zabaleta was dismissed. It was a simple decision for referee Andre Marriner when the Argentine, played into trouble by Barry's careless pass, hauled down McManaman having earlier received a yellow card.

Then came the moment that will be recalled in Wigan forever. Watson escaped from Rodwell at the near post to meet Maloney's corner and history was made.