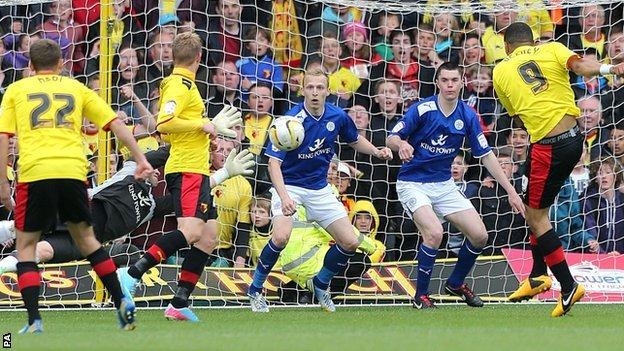 Twenty seconds after Anthony Knockaert had a debatable penalty saved at the other end, Deeney thumped in a shot.

Earlier on, a stunning Matej Vydra volley wiped away

David Nugent headed in to restore Leicester's lead and, after another Vydra strike, Deeney netted the winner.

"Anthony Knockaert had an excellent game, but it was him who missed the penalty that is what will be remembered. Watford were much better in the second half. They deserve it. From agony to absolute jubilation for the home fans."

A heartbroken Knockaert was in tears at the final whistle, while joyous Hornets fans invaded the pitch after their side booked their place in the Championship play-off final at Wembley on Monday, 27 May.

The Foxes had only sneaked into the play-offs following a final day win over Nottingham Forest and they exerted the early pressure as they tried to build on their first leg advantage.

The visitors had an early shout for a penalty when Ritchie De Laet's near-post shot from Knockaert's corner appeared to be blocked by the arm of Joel Ekstrand, but referee Michael Oliver turned down their appeals.

The home side heeded the warning and almost scored on the counter attack. Deeney laid a pass off to fellow forward Vydra, whose shot across goal went the wrong side of the post.

Deeney, who was back after being suspended for the first leg, had a long-range strike palmed away by keeper Kasper Schmeichel before the Hornets took the lead in spectacular style.

Defender Marco Cassetti flighted a ball to Vydra and, after watching the ball drop over his shoulder, the Czech striker atoned for his earlier miss by brilliantly volleying a left-foot shot into the far corner.

The goal was harsh on the Foxes but they kept up their positive mindset and did not take long to level, with Nugent adding to his goal in the first leg by nodding in a Knockaert corner at the far post.

After the break, Watford found some passing rhythm and twice went close.

Firstly midfielder Cristian Battocchio produced some neat skill on the edge of the box, only to shoot just wide, then Almen Abdi had a 12-yard shot deflected wide after Vydra helped on a Matthew Briggs cross.

It was Vydra who again hauled them level. The Football League player of the year played a one-two with Deeney before side-footing a shot into the bottom corner.

Leicester had to withstand some intense pressure before they were given the chance to book a place at Wembley after being awarded a dubious penalty for a Cassetti foul on Knockaert in injury-time.

Knockaert picked himself up to take the spot-kick, only to see his effort and the follow-up saved.

The Frenchman's misery was compounded when Watford counter-attacked and, after Jonathan Hogg's knockdown, Deeney applied the finishing touch in a dramatic finale.